NYC festival Panorama is fast approaching — it goes down on Randall's Island at the end of this month, from Friday, July 27 through Sunday, July 29. There are tons of worthy acts on the three-day lineup, but we’ve picked out 10 acts we’re particularly excited to see. You can see our picks below.

Set times will be posted in the days prior to the fest (stay tuned). If you’re going, you may want to check out the various ways to get there, including walking or biking over the RFK Bridge or the E. 103rd St footbridge, taking the X80 bus over the RFK, or taking the ferry or shuttle (which you need to purchase tickets for). There’s no parking on Randall’s Island for cars/motorcycles, but there’s a dedicated lot with bicycle racks.

There’s no re-entry once you’re inside for the day. You can reserve a locker if you need, but leave your air horns, drones, flags, hammocks, kites, acoustic guitars, selfie sticks, skateboards, and umbrellas at home. (It is rain or shine, though, so invest in a poncho!) There’s a water refill station, and you can bring one empty or factory sealed non-metal water bottle (max size 2L). For food, there are vegetarian/vegan, Kosher, and gluten-free options.

Don’t forget, there’s also The Lab on the festival grounds (“an interactive experience that combines technology, artistry, and design, created exclusively by New York City–based artists”), and there are Panorama aftershows at various NYC venues that weekend. More info at Panorama’s website, and via the festival’s mobile app.

St. Vincent just gets better and better. Last year’s MASSEDUCTION, which has everything from personal piano ballads to crazed avant-pop, is possibly her best yet, and her live shows since have been unreal. She first toured a high-concept pop art show in support of the album, but her recent festival sets have been more of a traditional rock show (though it’s St. Vincent, so it still isn’t that traditional), and they’ve been including “Fast Slow Disco,” her recently-released, more upbeat version of MASSEDUCTION ballad “Slow Disco.” That version of the song shines even more in a live setting — if you haven’t experienced it yet, you can’t miss it.

You may have heard about David Byrne’s current tour where he’s backed by 12 musicians, all of whom are “untethered” — aka there are no guitar or mic cables, no drum riser, no amplifiers or anything else besides the musicians and their instruments. It’s Byrne’s most ambitious stage show since Stop Making Sense and possibly his most acclaimed as well. It may be for his new album American Utopia, but he’s been including tons of Talking Heads material into the sets, including such classics as “This Must Be the Place (Naive Melody),” “I Zimbra,” “Burning Down the House” and more. Festival sets tend to be even more concentrated on audience favorites, of which he has many. Alternative and “indie” wouldn’t be the same without the music Byrne has made over the last 40 years — here’s a chance to see the original article, still at the top of his innovative game.

SZA had to take some time off from touring after damaging her vocal cords, but thankfully they aren’t permanently damaged, and she’s been recovering and is back out there. That makes it even more of a treat to be seeing her this year, and it already would’ve been a pretty major treat. After years of mixtapes and EPs, she finally released her proper debut album last year, Ctrl, and we named it the second best album of 2017, only behind her TDE labelmate Kendrick Lamar. It’s a stunning collection of indie-ish R&B, where basically every song feels like it could’ve been the hit (not to mention this year’s unstoppable “All the Stars” with Kendrick from Black Panther: The Album is another big hit), and we’re excited to sing along to every single one of those songs at Panorama.

We named Yaeji one of the best new(ish) artists of 2017 off the strength of her two great EPs, which touch on hip hop, dance music, dream pop, R&B, and more. It’s impossible to pin down her sound, but it’s so easy to like it which helps explain her rise from underground dance parties to festival stages. And though she sings in both Korean and English, the language of her music is universal, and it should get anyone dancing, whether they understand the words or not.

THE WAR ON DRUGS

There’s a noticeable movement going on within indie rock right now, where all of a sudden ’80s heartland rock (like ’80s Petty, Springsteen, Dylan, Dead, Dire Straits, and even less cool stuff like Don Henley and Bryan Adams) is a major influence on modern-day indie bands. And leading this little movement is The War On Drugs. Their 2014 album Lost in the Dream may be the definitive indie-heartland rock album of our time, and last year’s major label debut, A Deeper Understanding, took both TWOD’s sound and their popularity level to bigger places. Their live show rocks, and a big outdoor stage like the one they’ll play at Panorama is a great place to see it.

Fleet Foxes perfected a blend of psychedelic folk, psychedelic pop, and gorgeous vocal harmonies on their instant-classic 2008 debut, and they’ve gotten delightfully weirder with each release. They took a hiatus after 2011’s Helplessness Blues, but finally returned last year with the excellent Crack-Up, and it’s great to have them back. Their sound is as trippy and as beautiful in a live environment as it is recorded, and Randall’s Island should be a wonderful setting to see them in. Fleet Foxes just sound better outdoors.

Charlotte Gainsbourg hasn’t toured in five years, and even when she does tour, it’s usually not very many dates. Despite also being an actress who has been in some very uncomfortable films, she has long grappled with a crippling shyness which has mostly kept her off the stage. On last year’s fantastic Rest, however, she dealt with that shyness head-on, as well as the deaths of her father and sister, and doing so changed her attitude to performing. “I don’t want to pretend that I’m comfortable, that I have a big voice,” she told The Guardian last year. “And it’s not that it’s suddenly that I feel it’s enough. It’s just that that’s who I am.” Setlists on this tour have focused heavily on the lush, groovy, very French Rest, but she does pepper her set with songs from the rest of her career — including the scandalous 1984 single “Lemon Incest” which she released at age 13 and was written by her father, Serge Gainsbourg. Even with her new attitude, who knows when she’ll play the U.S. again?
—

Michelle Zauner turned her full attention from mathy indie-punk band Little Big League to her dream pop-ish Japanese Breakfast project with 2016’s great Psychopomp, which prompted us to call JB one of the best new-ish artists of 2016. Then she signed to the larger Dead Oceans and released the even better Soft Sounds From Another Planet, which has stuff in common with both Psychopomp and Little Big League… plus a robot love song with auto-tune and saxophone. She keeps getting bigger and better, and her live show is a lot more energetic than you usually expect from an artist labeled “dream pop.”

Though not a top line headliner of the festival, don’t underestimate the power of Seattle dance duo ODESZA whose previous NYC show was in an arena. Fleshed out with live drummers, guest vocalists, strings, visuals, lasers and more, the group is electronic music that is much more than a couple dudes pushing buttons. Here’s an excerpt of 303 Magazine’s review of one of their recent Red Rocks shows: “What separates ODESZA from other artists is, hands-down, their ability to combine live instruments, vocals and electronic music into a subliminal and hauntingly perfect fusion. Every element, from something as simple as the drumline’s head movements, is worked to perfection, creating a harmonious synchronization, unlike anything I’ve seen before. Mills and Knight have clearly become such masters of their art that no energy or thought even appears to exude from them as they create otherworldly magic. For them, everything is second-nature — an extension of their being.”

Over thirty years after the release of her breakthrough album Control, Janet Jackson’s influence looms large over contemporary pop and R&B, with artists from Beyonce and Lady Gaga to Sleigh Bells and Deerhoof citing her as an inspiration. In that time she’s lost none of her relevance, and she’s still a powerhouse live, too. Her recent tour-opening performance headlining New Orleans’ Essence Music Festival earned rave reviews, with The Times-Picayune saying, “the 52-year-old proved that she’s still in command of the angular, athletic dance moves that inspired a generation of stars.” The set found her mixing selections from her loaded songbook of hits with deep cuts and rarities, all while showcasing an impressive repertoire of dance moves. Her Panorama headlining set on Saturday should be a big singalong and dance party, not to mention it’s a pretty rare chance to see this arena-level legend, possibly from a much closer spot than at her own shows. 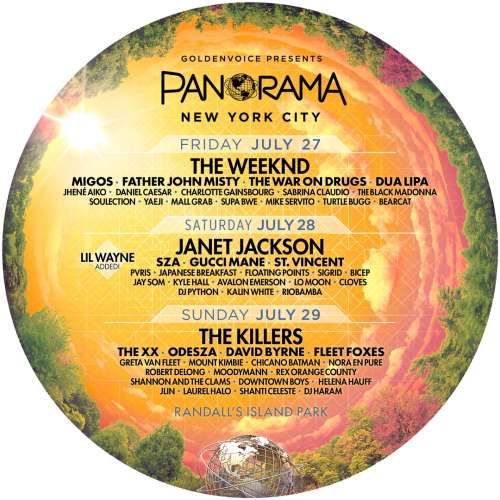