THIS SPRING and summer, you may notice a familiar-looking figure pedaling along your local cycling path, and you may ask yourself: “Is that David Byrne, the former frontman of Talking Heads?” It could well be. Mr. Byrne has just embarked on a world tour—taking him to more than 90 cities, from Santiago, Chile, this Friday, to Brooklyn, N.Y., on Sept. 17—to promote his new album, “American Utopia,” and he’s bringing his bike.

Though this is his first solo record since 2004, these last 14 years haven’t been idle ones. Mr. Byrne has racked up countless miles, and he has the projects to show for it. His cycling habit led to his 2009 book “Bicycle Diaries,” a collection of essays drawn from his two-wheeled excursions in cities such as Istanbul, Buenos Aires, Pittsburgh and New York, where he lives, as well as Manila, in the Philippines, where he found inspiration for “Here Lies Love,” the 2010 disco-musical about Imelda Marcos he created in collaboration with Fatboy Slim. Mr. Byrne’s worldly expeditions informed another recent project, called “Reasons to be Cheerful,” a collection of pioneering initiatives in wide-ranging fields, from transportation to energy production, all cataloged on a website of the same name. His observations on these initiatives gave rise to a TED Talk-like presentation, which he’s given recently in New York, London, Amsterdam and Berlin.

Travel of a more allegorical nature is a recurring motif on the new album. In the lead single, “Everybody’s Coming to My House,” Mr. Byrne sings, “We’re only tourists in this life. Only tourists, but the view is nice,” which sums up his engaged approach to life and travel. In other words, Mr. Byrne said, “Life is fleeting. One hopes we participate, and that we don’t just watch from the hotel balcony—that we’re part of it.” 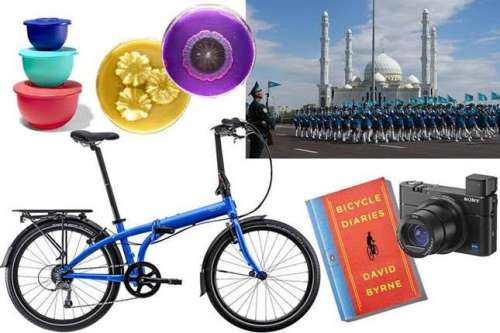 On tour, we mostly travel by: bus. It’s actually more efficient than flying, unless you own your own plane. You often arrive in a town in the morning, having slept on the bus. So you’ve kind of gotten a full night’s sleep. On European tours, some bands would often travel with their own cooks. Often two people, who would have a stove and an oven inside a road case. Maybe a little fridge in a road case. And within, like, half an hour, boom, boom, boom, boom: They’ve set it up and made a whole kitchen.

When I go on tour I always bring: Tupperware. Takeout containers. It probably wouldn’t work for traditional travelers, but because there’s a microwave on the bus and a little fridge, I can take leftovers from dinner. I put it in the little containers to stash in the fridge and in the mornings zap it up for a nice breakfast. I love re-living the dinner from the day before.

The other thing I always bring is: a bicycle. The bike I’m taking with me on tour is a Tern Node D8, which is pretty much a full-size bike but folds in half. Some of the other people on the tour will have similar ones. We slot them in the bus where the luggage goes.

One side effect of traveling a lot is: waking up and not remembering exactly where you are. Which can be really funny sometimes. I remember one night at a hotel in Brussels the bed was really high. I woke up in the middle of the night and rolled out of the bed, and boom—onto the floor. Rude awakening.

When I have down time while traveling: I’ll explore the town on the bicycle. Maybe go to a museum, or do other things. Maybe just wander aimlessly. I love it. I see things from street level that are different from just reading the papers. I remember riding a bike around all sorts of towns before the housing crisis, and just seeing all these houses being built—developments just mushrooming out, everywhere. A lot of them empty. Not all of them, but a lot of them, and then thinking to myself, people here can’t afford this. It doesn’t make sense. Something’s gone wrong here. You could just see it.

If I don’t have my bike: I’ll try a city’s bike-share program, to test whether it works or not. Milan had two competing versions of the Chinese park-anywhere bike startups (Mobike and OFO). They work really well, I have to say. You can find them on your phone and go, oh, there’s one right there and just unlock it with your phone. I’m sure [the companies] know how they’re going to solve these issues—like the way everybody’s going to dump them at the train station at 5:00 p.m.

Some of the most cyclist-friendly cities are: Amsterdam or Copenhagen, where everyone’s on bikes. But it’s when you’re in other places that you have a sense of freedom you realize is unique to cyclists. In Rome, where hardly anybody is riding a bike, you realize, “This is perfect!” There’s all these twisty little streets (and a couple of hills) and you realize the traffic is all snarled, but you can just zoom through and get around. The same thing happened in Istanbul, where traffic is atrocious. There’s a thrill of being able to say “Ha-ha! I beat the system here!”

My formative travel memories are: with my parents. We’d go on little road trips, usually in Canada, to parks and things like that. I remember mosquitoes. And when I was in art school, RISD [Rhode Island School of Design], you could still hitchhike around and explore the country that way.

A favorite recent discovery was: Micropia, in Amsterdam. It’s a microbe museum. It’s the world’s only microbe museum, they’re proud to tell you. Everything’s in jars, and there’s microscopes with screens, so you can see little things crawling around. And they had this jar with a tuna salad that had been in there for a good six, seven months. It had completely liquefied. Luckily you couldn’t smell it.

I take photos with: both [a phone and a] Sony -DSC RX100. It’s not a cheapie camera, but it does fit in the pocket. There’s more depth to the image. There’s a real lens.

I’ve never been to: much of West Africa or Central Africa. They’re on my list. I feel like I might need a way in—somebody not just to help me navigate the roads but to figure out how to behave in a sensible way there. Also, I don’t know if I’ll ever get there, but I’m fascinated by Central Asia. Uzbekistan, Turkmenistan, Kazakhstan—all the Stans.

I remember getting completely lost: while on tour with Talking Heads quite a while ago. We traveled across Sweden and stopped to visit the trumpet player Don Cherry and his wife, Moki. There was a lovely forest across the street [from their house], and I thought I’ll go for a walk in the forest. I think it was a planted forest; the trees were all very straight and orderly. After a while I looked around and thought, “Oh, it all looks exactly the same in every direction. How do I get out of here?”

—Edited from an interview by Matthew Kronsberg