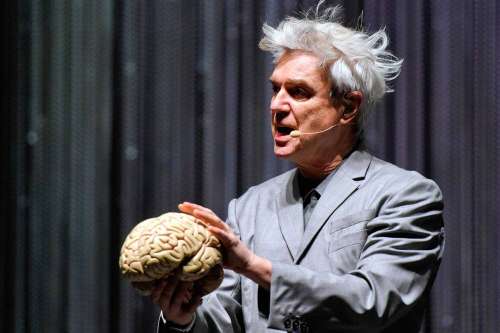 When David Byrne plays Reynolds Hall on April 18—touring behind new album American Utopia, his first release since his 2012 St. Vincent collaboration Love This Giant—it’ll be perfectly natural for you to expect the pioneering art rocker to sweat out a few Talking Heads oldies. (Judging from recent setlists, he likely will). But that’s somewhat unfair to Byrne, who has cultivated a terrific solo career for nearly 30 years. Byrne has a restless, creative mind, one that has dabbled in everything from filmmaking to urban design—and he’s got the rich and layered solo catalog to prove it.

1. “Make Believe Mambo” (Rei Momo, 1989) Though Byrne’s extracurricular work officially began with the 1981 Brian Eno collaboration My Life in the Bush of Ghosts, the line between that record and such Eno-produced Heads albums as Fear of Music is almost microscopically thin. This single, from his solo debut, is a joyous, Latin-infused “hi there”—a clear signal that Byrne was eager to really change things up.

2. ‘Don’t Fence Me In” (Red Hot + Blue, 1990) With this Cole Porter cover, Byrne proves once and for all that his brand of fun is contagious.

3. “A Long Time Ago” (David Byrne, 1994) This somber ballad contains what could be Byrne’s white paper statement: “In between stations I can hear/a million possibilities.”

4. “Finite=Alright” (Feelings, 1997) Byrne loves a good string section, and he’s rarely made better use of one than on this charming ode to mortality.

5. “Au Fond du Temple Saint” with Rufus Wainwright (Grown Backwards, 2004). Opera? Why not? Byrne gifts this Bizet duet with one of his sweetest vocals—and the call-and-response between him and a typically bored-sounding Rufus Wainwright is a hoot.

6. “Strange Overtones” with Brian Eno (Everything That Happens Will Happen Today, 2008) Put simply, this is the best Talking Heads song that the Talking Heads didn’t actually make—as well as the best song about the art of songwriting.

7. “Toe Jam” with The Brighton Port Authority (I Think We’re Gonna Need a Bigger Boat, 2008) The BPA is actually just Fatboy Slim—and this lively dance track brings out the best in both artists. Bonus: It’s kinky as hell.

8. “Snoopies” with De La Soul (And the Anonymous Nobody, 2016). Where most hip-hop artists use 1980s-vintage artists just for flavor, De La Soul seem legitimately smitten with Byrne, granting him both the hook and multiple verses on this snaky New Wave number.

9. “Who” with St. Vincent (Love This Giant, 2012). On its face, a collaboration between Byrne and Annie Clark sounds like a “no duh” head-slapper—and this horn-driven shuffle proves the supposition correct.

10. “Everybody’s Coming to My House” (American Utopia, 2018) “We’re only tourists in this life/Only tourists but the view is nice,” sings Byrne on the lead single from his new album. “Life is short” is hardly an original sentiment, but it’s a testament to Byrne’s creativity that he found a new way to say it—and to get us grooving to it.