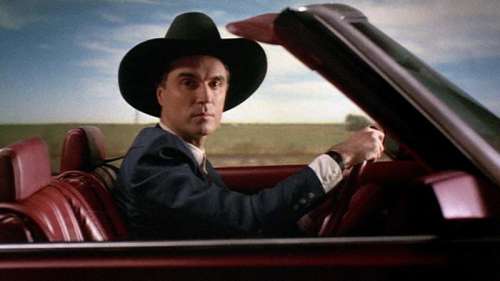 “What time is it? No time to look back.”

On November 28th, the Criterion Collection released David Byrne’s 1986 film “True Stories,” finally giving it the Special Edition treatment that has eluded it for too long. Until now, the film has only been available in crummy pan-and-scan versions from Warner Home Video and was among their first few crops of titles to ever hit DVD (my first DVD purchase, actually) back in 1997. It hasn’t been touched since. At this point, I would have been happy enough with just a Warner Archive Blu-ray transfer with the proper aspect ratio, but Criterion gave the fans the best gift imaginable. Not only does the Blu-ray showcase a wealth of wonderful extras (more on that later), but also a CD soundtrack featuring music that, until now, had only been available on vinyl and cassette as “Sounds From True Stories.” As if that weren’t enough, the CD also features the versions of the songs with the original cast recordings, something Byrne has been wanting to see released for decades.

It has never been easy to describe the film. One cannot refer to it simply as “a musical” or “a comedy.” Rather, the movie is musical. It is comedic. It is also poetic, strange, surreal, melancholy, joyous, dreamlike, unpredictable and a lot of fun. But what exactly is it? It tells you right at the start with a plain title card that reads: “TRUE STORIES. A FILM ABOUT A BUNCH OF PEOPLE IN VIRGIL, TEXAS.” From there, the film’s Narrator (Byrne) takes us on a tour of this odd little town, the population of which is comprised of about 50 sets of twins and all sorts of eccentrics inspired by outrageous stories culled from the Weekly World News. There’s the lovesick Louis Fyne (John Goodman), who advertises on television that he’s “looking for matrimony with a capital M.” There’s also a woman who never gets out of bed (Swoosie Kurtz), a married couple who haven’t spoken to one another in years (Spalding Gray and Annie McEnroe), a man who reads people’s tones through his own inner radio transmitter (Tito Larriva), a woman who spins wild stories that are clearly not true (Jo Harvey Allen) and a religious man (Pops Staples) who can perform “positive” spells on people. And there’s Byrne himself, who might be the oddest character of them all. 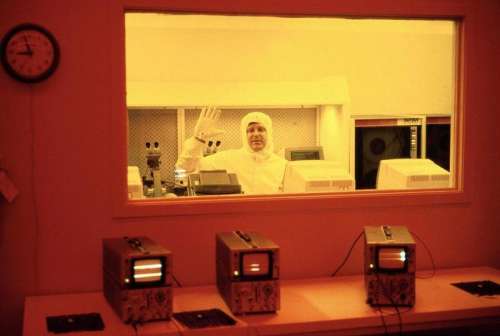 Byrne introduces us to these people and allows us to draw our own conclusions as to why he finds them interesting. When he doesn’t drop in on them, he explores the Texas landscape via his red convertible and through Ed Lachman’s gorgeous cinematography. There are many shots of wide open landscapes with clear horizons and deep blue skies, often with Byrne driving and offering a deadpan insight such as “I had something to say about the difference between American and European cities. But I forgot what it is.” Although “True Stories” takes place in a small town, I still regard it as one of the great road trip movies.

When we’re not observing these characters’ behavior or getting a guided tour of this pocket of Texas, the movie is a musical, thanks to nine songs composed for the film by Byrne, three of which are performed by Talking Heads (two music video sequences and the closing credits). The rest are sung by John Ingle (as a preacher), a group of kids wandering onto a construction site, Goodman, McEnroe, Larriva and, best of all, Staples. All of this culminates in a staged variety show for the town’s Celebration of Specialness, a full day of parades, bizarre fashion shows and musical performances where lives may be changed forever.

I sometimes like to think of “True Stories” as a sci-fi film, in which Byrne plays an alien visiting Earth for the first time and filing reports on what he has learned along the way. Much is made of how the wide open vistas of Texas used to be underwater and how the land used to belong to “the Indians” and now belongs to the businesses, highways and small towns like Virgil, filled with people all trying to realize their dreams. Byrne observes them and their use of the landscape without judgment. Just when you think he is trying to lay on a thick, anti-Reagan-era message, he cuts to a piece of performance art or a character behaving in an odd manner, so as not to be heavy-handed. Today, with his environmental activism, Byrne might have made a very different film, but “True Stories,” as it exists, has an inspirational element that only recently dawned on me: Byrne is a neutral New Yorker traveling to a red state and finding beauty and joy, leaving all politics aside, a truly alien concept in 2018. As Byrne says in an interview, this is more about zooming in on America, not zooming out. If you zoom in close enough, you find more hope than despair. 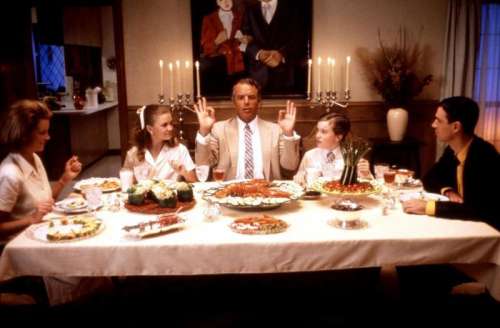 As "True Stories" zooms in on its characters, it's not to a degree that allows them to have much in the way of introspection about why they are the way they are, except maybe for Goodman. This is more a movie about the ever-changing American landscape, often focusing on untouched land that has yet to be taken over by industry or capitalism. It’s coming, of course, and Byrne acknowledges that through the town mayor, Earl Culver (Gray), who gets giddy about the idea of more and more houses leapfrogging and extending the town out further. In the same scene, a group of uniformed kids wander onto a construction site and sing about wanting to go to the mall, wanting a new bicycle and being the kings of the world, a world being built for them on empty lots, where once “dinosaurs did a dance,” “Indians had a legend” and “Spaniards lived for gold.” (City of Dreams)

Today, “True Stories” rarely, if ever, gets mentioned as a film that had a lasting influence or impact on any director. While Byrne has cited Robert Altman’s “Nashville” as a primary influence, it’s not hard to see why his film has stayed below the radar all these years. There hasn’t been a movie quite like this since its release. It remains uncategorizable. Yet, the population of these characters and the dead-center framing brings to mind a Wes Anderson-like sensibility. Also, when I hear some of the dialogue, it reminds me of the early works of David Gordon Green, with wonderfully offbeat non-sequiturs that come off as a natural way of speaking:

Louis (Goodman): You know, I’m very aware of my appearance.

Louis: Well, check these out. [shows off a new pair of shoes] Yup. Like the song says, it’s a scientific lifestyle.

Narrator: Hm. I don’t know that one.

Unfortunately, not everything about “True Stories” is cause for celebration. Warner Bros. wouldn’t let Byrne make the film unless they could get a Talking Heads album out of the deal, a compromise Byrne had to make, resulting in a very flat-sounding Talking Heads album. The songs are all wonderful in the film, but the Heads’ versions on the album have the feeling of a contractual obligation. No one seemed interested in making the production sound anything more than “releasable,” although in this edition of the film, “Wild, Wild Life” sounds remarkably different and improved.

The other three band members weren’t too keen on this movie idea either. Along with each of them getting gallons of chocolate dumped on them during the “Love For Sale” sequence, Byrne’s project also cost them a slot at Live Aid because of the filming schedule. “True Stories” was the beginning of the end for one of the great bands to emerge from New York’s CBGBs scene in the late ‘70s. It’s hard to shake off that fact. 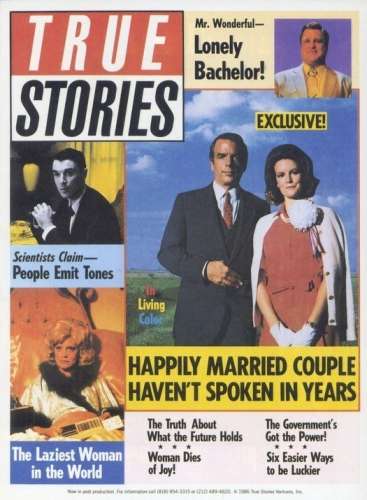 Another aspect of the film that hasn’t aged well is the attribution of three of the central characters: “Lazy Woman,” “Lying Woman” and “Cute Woman,” as they are billed in the credits. There are no male characters with such attributes. Of course, Byrne doesn’t mean to cause a stir with these placeholder names. In 1986, this type of thing was never an issue. I’m sure he would change it today if he could.

Even with all that baggage, though, “True Stories” remains a joy to revisit and Criterion has put together a stellar edition, at least in terms of packaging and extras. The hour-long documentary made especially for this edition contains multitudes of new behind-the-scenes info, although I wished more actors participated in it (“Lying Woman” Jo Harvey Allen is the lone contributor). The home movie footage is fascinating to watch, as are the deleted scenes, which I’ve been wanting to see ever since I read Byrne’s published screenplay and book, which came out at the time of release. The funeral scene, which got cut from the ending of the film, would have been a beautiful save if they had bothered to clean it up and color correct it.

Therein lies the problem with this edition, though: The transfer, while obviously sharper than anything Warner ever put out, looks darker and murkier than it should, at least on my copy. Having seen a 35mm print at the Gene Siskel Film Center back in October, I have to wonder if this is really the picture Lachman and Byrne approved. There’s a noticeable blue hue permeating many scenes, rendering them much darker than they should be. I also noticed a dramatic change in color in two shots at around the 1:08:30 mark when the crew is moving the scaffolding before the big show. The color actually changes in the middle of these shots, which is most certainly an accident nobody caught or bothered to fix. A re-do is in order.

As for the CD (which is only available with the Blu-ray, but can be purchased separately), it is the most complete soundtrack release of the film, but you may want to create your own playlist. The music is sequenced in the order in which it appears in the film, which makes for a jarring and uneven listening experience when played straight through. Still, it is worth owning and it is to Byrne’s great credit that the cast versions are now available after all this time. 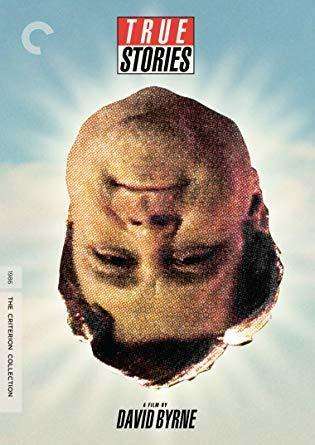 While the inserts contain, among other gems, an essay from the late, great actor-monologist Spalding Gray, the one thing missing from this whole package is a separate contribution from Stephen Tobolowski and his co-writer Beth Henley, who worked on the script originally before Byrne did a complete rewrite. Tobolowski, a gifted storyteller in his own right and who does appear in the documentary, tells an engrossing and funny tale of working with Byrne and inspiring the song (and eventual band name) “Radiohead.” You can listen to this story here on the podcast “The Tobolowski Files.” I highly recommend it.

I’ll never forget renting “True Stories” back in the spring of 1987, bringing it to a friend’s house and watching it with him and one other person. None of us really knew what this was going to be. I heard mainly positive things about it (especially from Roger) and I was growing more and more curious about “arthouse” films back then. I was 14. When it was over, we all knew we had watched something very different, but I was the only one who wanted to watch it over and over and over again, which I did in the ensuing years and decades. It began my obsession with Talking Heads, which eventually gave way to my lifelong obsession with U2, which later led to obsessions with Radiohead and Arcade fire, all of whom have collaborated with Byrne or have drawn inspiration from him. My post-middle school musical tastes started with “Stop Making Sense” when I first saw that on video in 1986, but had definitely been cemented a year later by the wild, wild, wild “True Stories.”

To order your Criterion Blu-ray of "True Stories," click here