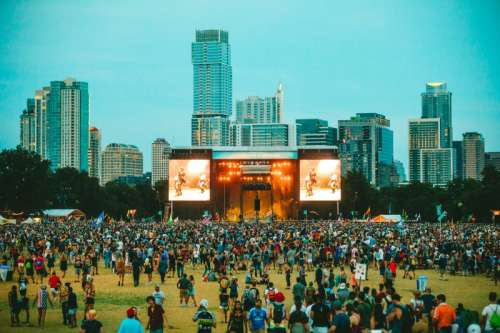 Every year at ACL Fest, certain things tend to stand out, whether it’s a fashion trend (remember Flash Tattoos?), new place to hang out (shaded wine lounge, anyone?), or new festival gear (inflatable couches). The weekend of Oct. 5-7 was no different. Here’s what caught our attention and helped make the first weekend of this year’s festival so memorable.

Most Popular Talking Point
Unsurprisingly, politics was the theme of the weekend. Canada’s Alvvays didn’t hold back on how they felt about a certain Texas politician born in Alberta. (“F*** Ted Cruz. You can keep him.”) Big Thief expressed the importance of feeling the love during this time in our country. Janelle Monae voiced her support for LGBTQ rights. David Byrne reminded the crowd to register to vote. Brandi Carlile told her audience to “stand up, especially on a day like today,” referring to the confirmation of Brett Kavanaugh to the Supreme Court. And even Paul McCartney had something to say during his set, explaining that he wrote the song “Blackbird” about what he described as “the struggles” that took place in the South in the 1960s. With all that has been taking place in Washington, it seemed like everyone felt the need to speak out.

Most Regal Performance for His Subjects
Ms. Monae certainly performed like a queen worthy of the throne she sat on during her Sunday afternoon set, but when it comes to royalty in music, we’re giving this one to Sir Paul McCartney. The amount of people who turned out—and stayed—for his headlining set Friday night was the most we’d ever seen at ACL. Attracting young and old fans and folks just wanting to see a Beatle in their lifetime, Macca dug into his 50-plus-years songbook and played more than two hours. There were several emotional moments, too, such as his song dedications to George Harrison and the Beatle’s audio engineer, Geoff Emerick, who died earlier this month. Despite his voice sounding a little weak at times, McCartney proved you can still rock at 76. We all bow down to you.

Least Covered Band
Last year, Tom Petty passed away days before ACL, and it seemed like every band was paying tribute to him—from Asleep at the Wheel’s version of “Won’t Back Down” to the Killers’ take on “American Girl.” We thought surely this year there would be some Beatles covers as a way to show respect to Sir Paul. But we didn’t hear any. The bands must have felt paying tribute to a legendary artist should be reserved for the ones no longer with us.

Best Response to the #MeToo Movement
Once again, the organizers of ACL left women out of the headlining slots. That’s OK. Women kicked ass anyway. Big Thief’s Adrianne Lenker and Jackie Venson amazed spectators with their guitar shredding; Alice Merton had all the men in khaki shorts dancing during her energetic early afternoon set; and St. Vincent was, well, her usual electrifying self. Elle King, Janelle, Camila Cabello—they all proved how powerful the power of a talented woman can be.

Worst Place to Get a Beer
Look, it’s a festival—we know we’re going to have to pay a premium price on everything. But when we ordered a draught beer at the Beer Hall, it cost $9 for a small cup, and here’s the kicker: The first sip was warm. We discovered that the beer had been pre-poured and sitting out for who knows how long, which is not only gross, but also a little creepy.

Best Eco-Friendly Initiative
This year, we noticed people walking through crowds during shows to pick up cans and other recyclables—and the grounds were notably cleaner by each day’s end. Turns out, it’s the second year of the Rock & Recycle Program, in which the festival has volunteers fill a bag of recyclables in exchange for an ACL T-Shirt. Brilliant!

Worst Noise Violation
Metallica put on an incredible performance on Saturday night—but they started five minutes before their allotted 8 p.m. start time, effectively drowning out the end of Nelly’s crowd-pleasing show at the nearby Home Away stage. Were two full hours of playtime really not enough for the heavy metal band? Come on.

Worst Time to Try a Scooter for the First Time / Best Way to Get to ACL
Between the hills around Zilker Park and the roads packed full of pedestrians, the opening Friday of ACL is not the time to take your first spin on a scooter. That said, love ’em or hate ’em, the fact that so many people were able to take scooters to the festival made other rideshare options easier and cheaper.

Hottest Outfits (Literally)
Most performers didn’t let the sweat dripping from their brows distract from their music. But a special kudos goes to those who gamely went with wardrobes better suited to a festival in Aspen than to Austin’s autumnal 90-degree days with a thousand percent humidity. David Byrne and his 12-member band looked sharp in their Dr. Evil-style fitted gray suits as they marched around the stage in sweat-soaked unison. And despite the sweltering heat, Janelle Monae pulled off perhaps the most costume changes of anyone at the festival, including a spin around in those famous vagina pants.

Hottest Outfits (Figuratively)
Skin was in this weekend. We saw many butts, a few boobs, and a whole lot of sweat-covered flesh. We’re guessing there are quite a few sunburnt cheeks around Austin enjoying today’s cloud cover.

Best Reason to Rain Dance
We wore our rain boots, carried our jackets, and Murphy’s Law held—the weekend’s predicted thunderstorms stayed away, the clouds holding their moisture until the festival cleared on Monday.

Biggest Question on Everyone’s Mind
Who is Andrew, and why does he have a boner? Throughout Friday and Saturday, festivalgoers couldn’t help but notice a plane flying around the Zilker Park vicinity with a banner behind it that read: Andrew Has a Boner. Thanks to the Reddit users, we learned that it was an advertisement for the Netflix series Big Mouth and not a real man in need of a doctor.