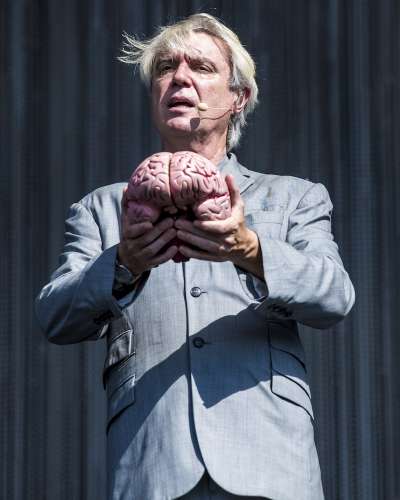 David Byrne began with a brain.

Emerging quietly and alone on the massive ACL main stage setup with only a small table and wooden chair, the Talking Head sat down and held up a model of man’s center of intellect: “Here is a region of abundant details. Here is a region that is seldom used.”

Then he launched his Friday afternoon set behind “Here,” closing track to this year’s American Utopia. Byrne, 66, followed with an hourlong dive into the subconscious behind primal, percussive rhythms and his cerebral, almost absurdist lyrics. Even as the band swelled to eight members on “Lazy” and then 12 with “I Zimbra,” the show remained minimal and precise, all instruments strapped to the players as they marched around the stage in free-flow formations.

The 13-song set rested heavily on Talking Heads favorites, revving midway with “This Must Be the Place (Naive Melody)” and “Once in a Lifetime” as the band sweat through their matching gray suits and the funky, stripped-down, New Wave rhythms increasingly entranced behind Byrne’s charmingly awkward vogues. Likewise, the double shot of “Road to Nowhere” and “Burning Down the House” sent the crowd into a dancing frenzy.

Yet Byrne saved his most powerful statement for last – a cover of Janelle Monáe’s “Hell You Talmbout.” The full band shouted a litany of names of African-Americans slain by police, demanding recognition and atonement as Byrne shifted focus from the subconscious to collective conscience.