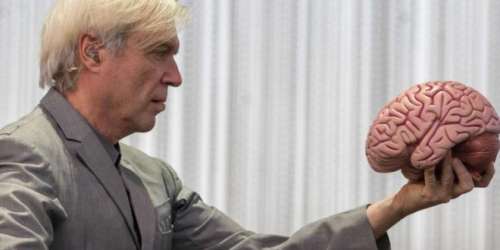 It is easy to cast David Byrne as a luminaire, ascribing the longevity, variety and eccentricity of his career to otherworldly talent or indescribable brilliance. Outwardly, he seemingly fits the depiction of a genius savant. Having crafted a singularly unique musical style buttressed by such disparate sources as African beat and dive punk, Byrne’s work with Talking Heads reveals a sound and texture unknown to rock ‘n roll. A nervous energy cuts sharply through the sonic precision of the rhythm and melody. Backed by band members from the arthouse community, some having cut their teeth with now-legendary acts like the Modern Lovers, and others who learned their instruments on-the-go, Byrne has always maintained a vision of pop music that carries through to his latest solo work, American Utopia.

Teaming up with long-time collaborator Brian Eno, and Scottish producer Rodaidh McDonald (who has worked with such genre-bending artists as The xx, Gil Scott-Heron, King Krule and Vampire Weekend), David Byrne’s newest album is part of a cycle of work that aims to inject a little joyfulness into an increasingly disjointed America. Byrne sets his sights squarely on the optimism of the American Experience, and American Utopia, along with a stable of other recent multi-media projects, highlights the little, uplifting moments of bliss experienced in otherwise exasperating times. In short, David Byrne’s quest is to remain in light, exposing the humanity of our ups and downs, failures and revelations.

By seamlessly integrating his world music tendencies with biting electronic instrumentation, David Byrne delivers a taught, anxious experience punctuated by raw humor and levity. On Everyday is a Miracle, a twisting and turning new track, David Byrne practices without preaching. He resurrects Naked-era African and Caribbean grooves to buoy sardonic musings on the Universe itself. It’s heavy stuff, but Byrne presents it without a hint of irony or restraint. Elsewhere, the album narrows focus without losing sight of the big picture. Everybody’s Coming to My House, the lead single, hearkens back to many of the questions posed over 35 years ago on Once in a Lifetime, only Byrne knows exactly who’s house this is. With a ripe beat and pealing layers of sonic muscle, Byrne lays out the welcome mat to examine a world gone haywire on his terms. Like the rest of the album, however, safe respites abound, proving once again that beauty and hope are most often found in the least likely of places.

American Utopia stands apart from David Byrne’s catalog. Surely, some of the intricate sonic elements, coupled with Byrne’s distinct vocals, will call to mind some of his finer moments from past Talking Heads records, but this is no Fear of Music, or Everything That Happens Will Happen Today for that matter. Over the course of a 40-plus year career in fine art, music and literature, Byrne has developed a unique perspective of the Universe, and the personalistic experiences of those in it. By shifting focus like a photographer’s lens, he seamlessly transitions between contemplations of collective consciousness and deeply personal human reflection. And if his performance of Everybody’s Coming to My House on CBS’s The Late Show is any indication, Byrne’s live tour of this album will be one hell of an experience. Look for David Byrne at the Florida Theatre on Wednesday, September 26th as he brings this American Utopia to moody, unrepentant, beautiful life.