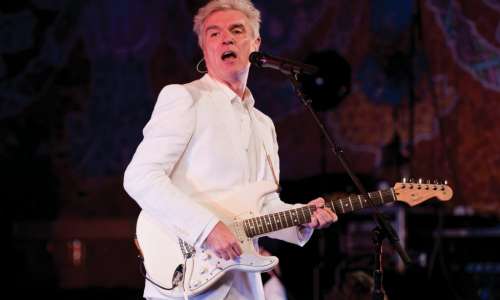 Oftentimes, to experience the unconventional, you need to leave often-travelled paths and usual haunts.

And so, recently, I found myself driving up to St. Petersburg to see David Byrne in concert.

As far as I know, he hasn’t performed south of Sarasota, at least on the gulf side of the state, in the past two decades.

And to sweeten the allure even more: His opening act was tUnEyArDs (or, to make my copyeditor happy: Tune-Yards).

The St. Pete concert at the Mahaffey Theater was the last of a trio of South Florida dates, which included Miami Beach and Orlando.

Tune-Yards was the perfect opening act: innovative, quirky and, like Mr. Byrne, sui generis. The group consists of front woman Merrill Garbus, backed by bass and drums. In addition to using various instruments such as ukulele and electronic drums, she loops her voice and instruments, creating layer upon layer of sounds, echoes, percussion and voice, until it’s a tsunami of music that crashes over you.

Many of the songs in the band’s 45-minute set came from their its album, “I Can Feel You Creep Into My Private Life,” including “Home,” “ABC 123” “Colonizer” and “Heart Attack.” The band also performed its popular first single, “Water Fountain,” which was used in a Google Pixel ad in 2016.

Their music is electronic, tribal, futuristic, as if we’ve suddenly leapfrogged ahead into a glorious, previously undiscovered, era of music.

After an intermission, Mr. Byrne opened his concert seated at a table on a bare stage, contemplating a model of a brain much like Hamlet puzzling over Yorick’s skull. He sang “Here” from his latest album, “American Utopia.” It includes the lyrics: “Here are too many sounds for your brain to comprehend/ Here the sound gets organized into things that make some sense,” a perfect description of the way I experienced the concert.

As he sang, the walls of the stage rose, revealing shimmering walls of beads? Rope? Light? It was hard to tell.

In announcing his “American Utopia” tour, Mr. Byrne had described it as “the most ambitious show I’ve done since the shows that were filmed for ‘Stop Making Sense.’” (And “Stop Making Sense” is considered one of the best concert films ever made.)

“American Utopia” was far beyond your typical concert; I’ve been attending and reviewing shows for decades, and without hesitation, I’d say this was one of the best concerts I’ve seen. Ever.

If seeing Tune-Yards is like seeing an early Jane Siberry concert, with sounds and songs with unexpected, shifting melodies, seeing Mr. Byrne in concert is like attending a Laurie Anderson performance: It’s theatrical, unpredictable, innovative.

He fronted what he’s called an “untethered band,” a group of 11 musicians and singers who wore and carried instruments like a marching band. In addition to guitar, bass and keyboards, there was plenty of percussion, with bongos, conga, bass drum, snare and even a tamborim tree and shaker.

He sang more songs from his “American Utopia” album, most co-written with Brian Eno: “Every Day is a Miracle,” “Dog’s Mind,” “Everybody’s Coming to My House, “Doing the Right Thing” and the catchy “I Dance Like This.”

These were interspersed with Talking Heads songs such as ‘Slippery People, “This Must Be the Place (Naïve Melody),” “I Zimra” and “Once in a Lifetime.”

There was even “Dancing Together,” a song from his disco opera about Imelda Marcos that he collaborated on with Fatboy Slim.

Everyone was barefoot, dressed in matching gray suits with gray shirts. It was a subtle detail, but Mr. Bryne’s suit jacket had three flap pockets in a row, one on top of the other. (Men’s suits typically have one or sometimes two.)

The show was choreographed by Annie- B Parson, whose work reminded me of Pina Bausch’s. The band shook and shimmied and marched and paraded and wove about the stage in intricate patterns. Yet, it all seemed totally organic, spontaneous, just another natural expression of the music, like the vocals and the instruments.

At one point, Mr. Byrne said that on this tour, people have been asking if he’s using music samples or supplementing the band with recorded music. Though he has nothing against samples, he said, the answer was no.

And to emphasize that, he introduced each band member, having him or her play. As each succeeding musician joined in, the sound grew richer and fuller, filling the venue.

The show ended with a rousing version of Talking Heads’ “Burning Down the House.” The sold-out crowd of 2,000 jumped up and down to the music, pogoing to this inane and catchy collection of non-sequiturs.

They followed up with two encores, ending, ultimately, with a powerful and visceral cover of Janelle Monae’s “Hell You Talmbout,” a driving anthem about black lives lost. The song, while insisting you “Say his name” or “Say her name,” lists murdered people of color killed by police or racial violence, from Trayvon Martin, Eric Garner and Michael Brown all the way back to Emmett Till.

Like everything else Mr. Byrne sets his hand to, his “American Utopia” concert defied the conventional and transformed a rock show into something that surpassed its restrictions.

It was theater. It was dance. It was performance art.

It was a joyous, transformative, healing occasion, a golden moment in the midst of gray days.