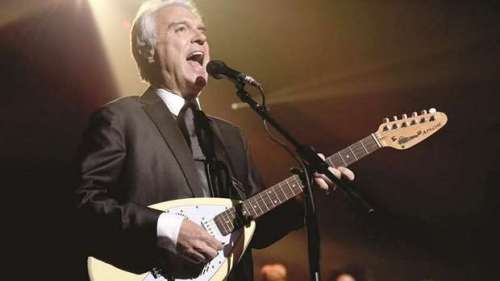 (MENAFN - Gulf Times) David Byrne was once described as rock music's renaissance man. The description is certainly apt. There is little that the 65-year-old Scottish-born, but American-raised multi-faceted artist has not achieved during a career which now spans almost half a century.

His music is more popular than ever. David's latest album, American Utopia, has gained by far the highest chart placing of his solo career. It debuted at number three on the Billboard 200 and number 16 in Britain.

Although Talking Heads did earn places in the UK top ten with their final three albums, the band with whom David found fame never charted higher than number 15 in America. This mark was made by their 1983 album, Speaking in Tongues.

'It's very pleasing that people seem to really appreciate my new album, David smiled. 'Some critics have said American Utopia is my first true solo album for 14 years. But there were many different musicians who made their contributions to the songs on Grown Backwards. There are not as many but still some other musicians who have performed with me on the new album.

'The difference between these two albums and the three others I've released during the intervening time is that Grown Backwards and American Utopia are credited solely to me. Everything That Happens Will Happen Today, Here Lies Love and Love This Giant are also credited to the artistes with whom I collaborated to create the songs. Considering the extent of David's various interests, it begs the question how he finds the time to make music. He is currently combining the promotion of American Utopia with a lecture tour entitled Reasons To Be Cheerful.

'I came up with the idea about two years ago. So many world events are bad news so I thought I'd put together a collection of stories which have brought about positive changes. They are not grand schemes, just small, pragmatic innovations that genuinely work. My objective is that people should leave the lectures feeling uplifted and more optimistic about the future.

Lecturing provides yet another string to David's bow. He has scored numerous theatre and film productions winning the Best Original Score Oscar for his work on Bernardo Bertolucci's The Last Emperor. He created an album of classical music, 1981's The Forest, founded record labels, initiated his own Internet radio station, written books, exhibited works of art and pursued so many more fields of activity which even included designing bicycle racks.

'Cycling is one of the things I'm really passionate about. A bicycle has been my main form of personal transport for most of my life. One of my books is Bicycle Diaries. It's a mix of travelogue, journal and photo album which covered my cycling experiences in places such as Sydney, Manila, San Francisco and my home city of New York.

'The bike rack thing came about after the New York Department of Transportation asked me to help judge a design competition for the city's new bike racks. I was so taken by the idea that I decided to submit my own designs.

'I knew this would disqualify me as a judge but I'd come up with the concept of appropriate designs for different areas of the city. For example, I designed a bike rack in the shape of a dollar sign for Wall Street.

Fabricated by the art gallery through which David exhibits and sells his work, the bike racks adorned New York's streets for about a year before they were sold at auction.
'Riding a bike used to be regarded as completely uncool. But attitudes have changed. Bikes are now cool in different ways. You can be just as cool riding an old junker as a top notch racing bike.

He does, however, recognise that bike riding is not for everyone and is all too aware that accidents can happen.

'A few years ago, I had a spill when I skidded on the cobblestones of West 14th Street in New York. I broke a couple of ribs but didn't get much sympathy or help from the New York police officers. One of them did at least ask if I was David Byrne.