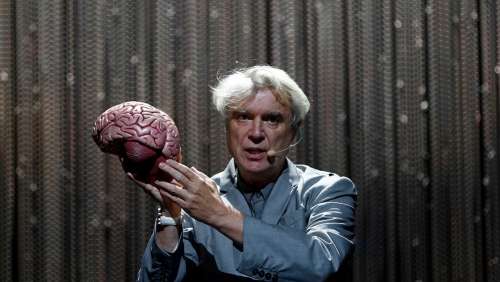 David Byrne and his band are in the middle of a 146-date tour, but every night, they’re touring their own stage. Saturday night at Los Angeles’ Shrine Auditorium, the Talking Heads founder and the 11 other musicians go pacing, parading and strutting in and out of lockstep through a solid hour and 40 minutes of nonstop choreography, as if it’s the natural order of business to be in constant, organized motion while playing their euphonious hearts out. Key to the success of all this free-range roc is the complete lack of any visible microphones or amplification equipment on stage while the players cleverly promenade around every square inch of it. Consider it the ultimate Bluetooth show.

When he did an abridged version of this performance at Coachella in April, Byrne’s set seemed likely to go down as the most awe-inspiring moment of the festival… until a couple of hours later, when Beyoncé happened. Those of us who saw both might still call it a draw, and there was actually some wonderful commonality between the bows — down to a Black Lives Matter component that was maybe a little less expected in his than hers. In some ways it was a case of great minds thinking a little alike: Beyoncé brought a marching band for her show, while Byrne brought a band that marches. Byrne’s show might be even more of a drum nerd’s fever dream: It’s hard to recall any other instance of a so-called rock band where there are twice as many people on stage on percussion as there are playing all other instruments put together. (The exact count: six drumline members, versus a guitarist, bassist, keyboardist, two singer/dancers, and Byrne, who only occasionally tipped the balance by picking up an additional guitar.)

Just as “Stop Making Sense” opened with a solo Byrne, this show began with the singer alone on stage, other than the facsimile of a human brain he was holding aloft, in “Alas, poor Yorick” fashion. The other 11 cast members would soon join him, one by one, emerging from the massive beaded curtains that were the show’s only set design. But for starters, in quietly leading off with “Here” — the subdued closer to his most recent album, “American Utopia” — he was pondering how different parts of that brain control different physiological functions, and mind/body dualism in general. That subject matter makes for an obviously appropriate kickoff to a show that couldn’t be any headier or sweatier: Byrne may be rock’s premier brainiac, but he’s never stopped believing that the world moves on a woman’s hips.

By the time he got to another of the seven songs from the latest album, “I Dance Like This,” he got a lot of laughter and applause for the nerdy lines “I’m working on my dancing / This is the best I can do / I’m tentatively shaking / You don’t have to look.” The laughter was knowing because in this show, the dance — choreographed with the help of the celebrated Annie-B Parson, who previously worked with Byrne on his joint tour with St. Vincent — exists at a very high level, even though it’s officially the secondary duty of the musicians. Each of the 21 numbers brought new wrinkles to the dance design: Sometimes, they’d march in concentric circles, or line up and move forward and backward on an every-other-player basis. “I Dance Like This” offered one of the more mischievous moments, starting with everyone prone on the ground, playing dead before rising and shining, At one point the music dropped out altogether for four bars of completely silent choreography, followed by four more frenzied bars of full-blast, strobe-light action. It’s equal parts inspiration and perspiration, and although everyone starts the night in a monochrome business suit, by the end most of them have soaked through their suit jackets, resulting in about 50 shades of sweat-stained gray. 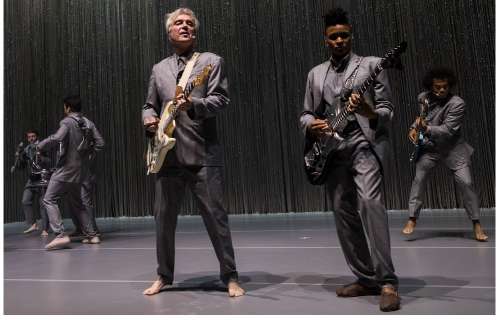 The permeable perimeter of the stage was used to best effect in “Doing the Right Thing,” which had most of the ensemble standing on the other side of those beaded curtains, sticking only their disembodied percussion instruments or guitar necks or (in the case of the two singer/dancers) a lone foot through the scrim onto the visible stage. “Bullet,” another new song, approaches a tragic subject, a shooting death, in a provocative way with lyrics that dryly describe skin and organs being torn asunder. It became slightly more moving live through a simple bit of staging — Byrne’s use of an off-hours theatrical ghost light (get it?) as a prop, before that barren lamp exited stage left, seemingly under its own power, at the end of the number.

Although nearly every step of the evening was carefully planned, there was still a looseness to the movement — the element of appearing at ease, even when they weren’t in At Ease formation — that obviously had a lot to do with the funk that has been the foremost component of Byrne’s music since he started adding African-American musicians to the core Talking Heads lineup in the “Speaking in Tongues” era. The polyrhythmic aspects clearly aren’t being decelerated when Byrne is adding bongos, timbales and gourds to the mix. But he doesn’t leave the pure rock elements of the show just to the white guys, either. He turned in a nutty guitar solo of his own midway through the Heads classic “Slippery People,” going heavy on the whammy bar. But he left the climactic solo, along with most of the other brief guitar breakouts of the evening, to Angie Swan, and seeing him cede his power at those moments to a black woman who shreds was a not inconsiderable thing.

Byrne has never been the most political of performers, but 2018 is bringing it out in him. He broke the theatrical mood to advocate for the Head Count voter registrars in the lobby, pleading for local elections to be taken as seriously as national. He revived a song from his brilliant but underseen musical about Imelda Marcus, “Here Lies Love,” briefly pointing out: “Paul Manafort helped out Ferdinand Marcus. Ouch.” And the closing encore was a cover of Janelle Monae’s powerful protest song, “Hell You Talmbout,” which the entire cast quitting the dancing, picking up additional percussion, and lining up to shout out the names of African-Americans whose killings in racially charged circumstances have elevated them into the hall of martyrs. (Monae “has generously allowed us to update [the list] as time goes by,” Byrne said.) Invoking tragedy and outrage at the end of a set otherwise mostly enveloped in glee only served to heighten the gospel undertones of the show, as a crowd that earlier shouted “My God, what I have I done?” now shouted back names ranging from Emmett Till to Stephon Clark, gunned down by police even since the tour started in March. The call-and-response wasn’t a downer — it cemented this tour’s status as one of the most exhilarating touring spectacles in the history of rock.

Byrne’s is the ultimate wedding of rock and movement — which is saying something, given that this is the guy who brought us the 1984 movie, “Stop Making Sense,” and kind of had a copyright on that. And this tour feels like that film’s long-aborning sequel. Fans at the Shrine on Saturday night had a right to feel as thrilled as Talking Heads fans did at the Pantages in ’83, even if we’re a little more prepared for the happy nuptials now. Even somebody who looks to rock and roll as the last refuge from the evil contagion of choreography would have to come away from this show in love with the possibilities of combining rock and dance — a potential any other performer is unlikely to fulfill soon. Once in a lifetime? That sounds about right.

Byrne’s tour, which has covered 102 dates so far, has 44 left to go before wrapping up overseas in November, including two nights at the Kings Theatre in Brooklyn Sept. 16-17 and an Austin City Limits festival appearance Oct. 12.