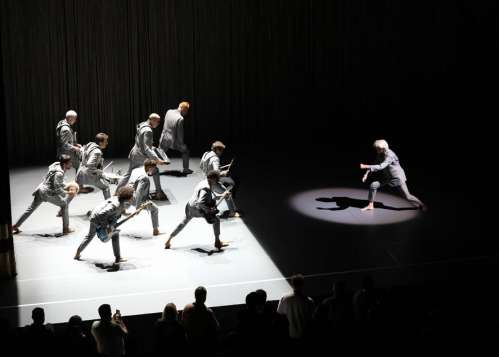 It didn’t seem odd when David Byrne opened his show seated at a desk and holding a model of a brain.

As he walked the stage of the Fox Theatre Tuesday night, holding the cranium forth like a biology professor during a lecture while singing “Here,” the towering beaded curtains behind him parted. One at a time, band members and backing vocalists emerged, casually swarming Byrne as the song from his current “American Utopia” album snapped to a close.

A few seconds later, as the band broke into “Lazy,” the first hints of the bottomless creativity of this live show began to clarify.

Byrne, a flop of white hair complementing his ash-colored suit, swung his hips and clapped his hands overhead as six percussionists, a bassist, guitarist and keyboard player moved in rhythm around a stage devoid of any accoutrements.

That pack of percussionists anchored the Talking Heads’ “I Zimbra” while Byrne, a guitar strapped on, moved forward and backward in lockstep with them.

It was daffy. It was different. And it was brilliant. 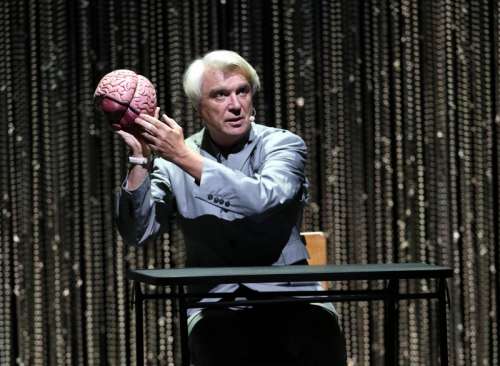 At 66, the Talking Heads icon has created a show that is exhilarating in its creativity.

Whether strutting like a peacock during the tribal march of “Slippery People,” its groove working its way into your veins, or shrouded in an eerie red glow during the pointed new “Dog’s Mind,” Byrne and his incredible band captivated.

Touring since March, this outfit understandably presents a precise show. Then again, touring since March could also mean fatigue. But there was nothing other than joy emanating from the stage as bare feet slapped and limbs flailed.

Byrne addressed the standing room only crowd a few times - and encouraged voter registration – but was primarily focused on this glorious display of art rock, evidenced in the lovely harmonizing at the end of the new “Everybody’s Coming to My House” with the crew posed in a pyramid.

Throughout the show, Byrne’s voice was in prime form, hitting notes with nary a strain while also receiving an impressive assist from his backing singers. Of course, no one was focused on his voice, but, rather, his mock staggering under a single spotlight as the familiar bass line of the Talking Heads masterpiece “Once in a Lifetime” snuck in, leading the crowd to roar its approval. 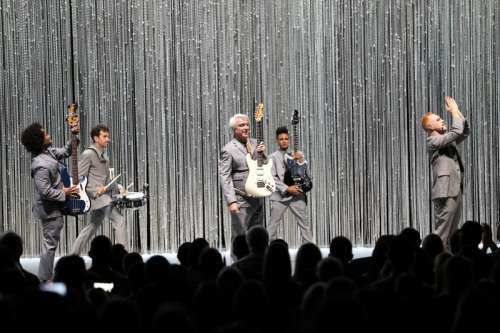 What could make this song even more potent live? Why, cymbal players, of course, along with a flashing-light shout-along to the invigorating, probing and cathartic lyric, “My God, what have I done?!” Likewise, the explosion of sound and dance mid-song epitomized what live music is supposed to make you feel.

His 2009 collaboration with Fatboy Slim and Dizzee Rascal, “Toe Jam,” sounded as if the music of the Caribbean and New Orleans had a love child and baptized it in EDM, but even that was followed by the magical stew of sound that is “Born Under Punches (The Heat Goes On),” a march that featured a shout-out (literally) of the band members’ names.

But Byrne’s masterful ringleading on this tour meant that every “Burning Down the House” was countered with the simplicity of “Doing the Right Thing.” Or even “I Dance Like This,” which began with everyone sacked out on stage like nap time at a day care, then slowing rising to engage in robotic aerobics in this celebration of self-expression.

Byrne has been closing his shows with an updated, percussion-stuffed rendition of Janelle Monae’s “Hell You Talmbout,” her 2015 protest song – just another surprising twist from a guy who clearly isn’t ready to retire his creative genius.