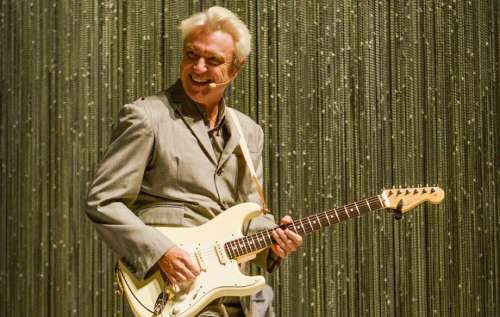 Burning Down The House...

David Byrne has announce a lengthy 2018 UK and Ireland arena tour in support of his acclaimed latest album, ‘American Utopia’. Full dates and ticket details are below.

One of the Talking Heads icon’s most adventurous and theatrical tours to date, his extended run of shows will now call at Leeds, Glasgow, Dublin, Birmingham, Cardiff, London, Brighton and Manchester in October and November.

“We’ll be doing some new songs, and many others that will, I assume, be familiar,” said Byrne on his current production. “I’m excited. This is the most ambitious show I’ve done since the shows that were filmed for Stop Making Sense, so fingers crossed.”

Byrne’s full list of upcoming UK and Ireland tour dates are below. Tickets to the newly announced October and November dates will be on sale from 12pm on June 18. All tickets are available here.

Reviewing Byrne’s latest effort ‘American Utopia‘, NME concluded: “For the Talking Heads traditionalists the most familiar thing here is ‘It’s Not Dark Up Here’. Elsewhere, ‘Doing The Right Thing’ has a tantalisingly banging outro and ‘This Is That’ is a beautiful, theatrical ballad. “The mind is a soft-boiled potato”, he sings at one point.

“Coming from anybody else that’d be ridiculous, but from Byrne, it not only sounds like a reasonable observation, but also kind of profound.”