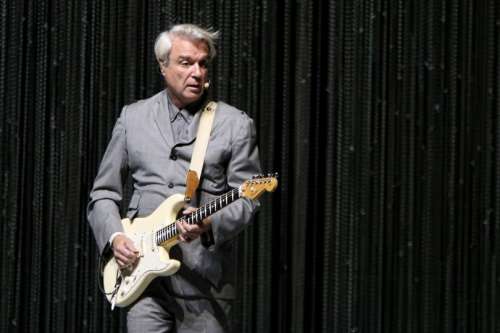 David Byrne walked a tightrope with his American Utopia show. On one hand, he is an almost self-parodic arty-farty dilettante.

You know the type: as well as his collaborations with Brian Eno, he's composed orchestral music, created a "disco opera" about Imelda Marcos (staged at the National Theatre, no less), won an Oscar for his work on the soundtrack of The Last Emperor, directed his own acclaimed movie and written several books.

But he was also the leader of Talking Heads - the best band of the 1980s and creators of a series of cracking hit singles. Could he balance the two sides of his personality in one show?

Byrne calls this tour his most ambitious since Talking Heads' classic concert film Stop Making Sense in 1984. It's based around a number of very good, very simple, ideas.

Firstly, there are no amps, cables or fixed instruments, allowing Byrne and 11 fellow performers to move "untethered" around the stage, in movements plotted by top New York choreographer Annie-B Parson.

Secondly, the setlist included 70 percent of this year's American Utopia album alongside a meaty helping of Heads classics. Stylish and clever, it bridged the gap between old and new. It was also enormous fun.

A barefoot Byrne in a grey suit appeared behind a bare table, on top of which was a model of the human brain, a prop for Here, a song about consciousness. 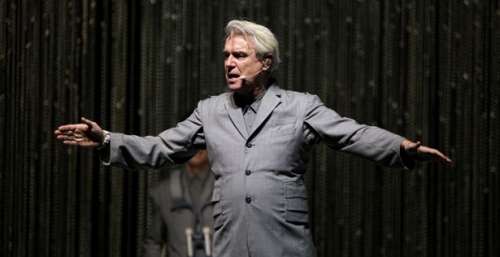 So far, so weird. The stage was surrounded by three walls of hanging chains, acting as both a visually impenetrable surface to show off the spartan but stunning lighting and a gateway through which the band appeared and disappeared.

What a beautiful noise they made.

They were diversions - a frantic I Should Watch TV, from Byrne's album with St Vincent, had him cowering from from the light of the goggle box; Toe Jam, written with Fatboy Slim, reduced him to giggles - but most of the night was divided between the new album and his old band's music.

With keyboards and drums strapped to musicians' bodies in unlikely rigs, and with the band in constant motion, you could be forgiven for thinking there was some musical cheating going on.

But Byrne demonstrated everything was live by introducing his band one by one as they built up the layers of a thrilling Born Under Punches.

Of the new songs. Dog's Mind (with the half-lit band lined up at the rear of the stage) was oddly touching, while Bullet (for which the ensemble ominously circled a single light) was astringent and troubling.

The home straight saw the crowd wildly dancing in the aisles to Blind and a delirious Burning Down The House. In the encores, a dramatic Road To Nowhere was followed by an awe-inspiring version of The Great Curve, the percussionists matching the inter-weaving voices of the massed singers every inch of the way.

The final number was a bracing version of Janelle Monae's Hell You Talmbout, its power growing as the band chanted a seemingly never-ending series of names of African-Americans killed in encounters with the police or other instances of racial violence. It was sobering stuff to end an overwhelmingly joyful event, with an artist at the height of his powers still able to break new ground at the age of 66.

I can't think of a single show this year that's matched it. 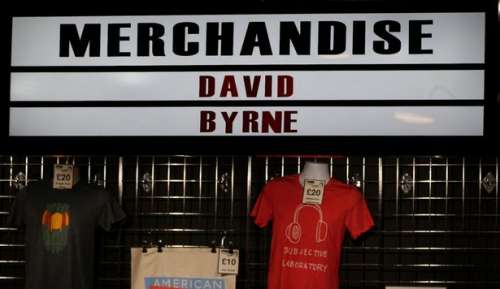 5 I Should Watch TV

7 Everybody's Coming To My House

8 This Must Be The Place (Naive Melody)

9 Once In A Lifetime

12 Born Under Punches (The Heat Goes On)

15 Every Day Is A Miracle

18 Burning Down The House