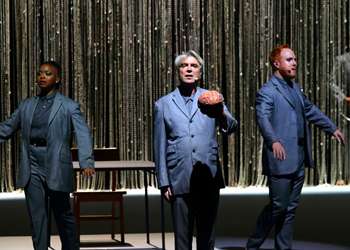 David Byrne’s American Utopia tour, combines minimalistic production values with extraordinarily complex polyrhythms. Byrne and 11 musicians – black and white; male and female – playing an array of exotic percussion instruments, plus bass, guitar and keys that provided horns and other colors, were in constant motion throughout the 100-minute, 21-song performance, marching and prancing across an empty stage, instruments in hand and mics on headsets. Barefoot and dressed in grey suits, the musicians, singers and dancers were tightly choreographed even as their dance steps resembled yoga poses as much as busted moves.

Byrne, who played occasional acoustic and electric guitars and drums but mostly stuck to singing, remains strong in body and voice. At 66, he still sounds much like he did at the beginning of his career, faltering only slightly on the falsetto notes in “Bullet.”'

The set was a well-chosen cross-section of Bryne’s career as a frontman and solo artist that leaned heavily on American Utopia. The seven tracks – which don’t penetrate on the LP – were piercing on stage.

There was no light show to speak of – just occasional bursts of blue and red to illustrate songs such as “Everybody’s Coming to My House” and “Burning Down the House” and large shadows that commanded more attention than the bodies that cast them – but this most sparse stage show was somehow as pleasing to the eyes as to the ears. It was Byrne’s brilliance at work again.

Byrne’s music has always had a visual bent, which explains why “Stop Making Sense” is considered one of the best concert films of the rock era and why Byrne stumbled around the stage like an arthritic drunk when loosely recreating scenes from the famous video for the Heads’ “Once in a Lifetime.”

Bryne took the stage alone at 9:15 p.m., seated with a model of the human brain, using it to give an ethereal dissertation on neurology on “Here” before the ensemble joined him for enthusiastic versions of his old band’s “I Zimbra” and “Slippery People.”

At this point, it became clear it would be a standing concert. And it was, as audience members spent more time on their feet (read: the entire show) than the performers, who occasionally sat or threw themselves on the stage floor for dramatic effect.

Mostly a celebration of celebrating, the concert nevertheless had a touch of seriousness, such as when Byrne pointed out young people’s abysmal voting rates and reminded them: “If you want to have a future, you have to participate.”

And when the 12 players came out for their final encore, they wrapped the concert with a percussion-fueled rendition of Janelle Monáe’s “Hell You Talmbout,” in which they called out everyone from Emmitt Till to Michael Brown and chanted Say his name!

It was a powerful end to a powerful show that received one of the most powerful ovations any concertgoer is likely to ever witness.