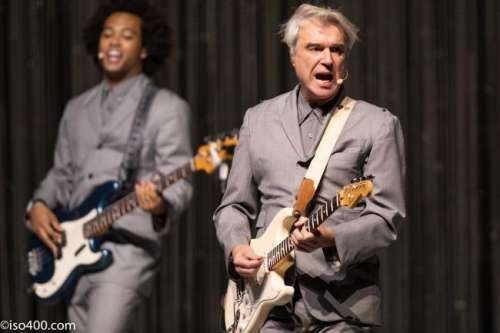 WHEN David Byrne wears a suit on stage, he ends up reinventing rock concerts.

The Talking Heads star did it in 1984 with that famously baggy one in Stop Making Sense – and he’s done it again in a smart grey two-piece for his brilliant new show.

Byrne’s American Utopia tour may be one of the most remarkable, joyous, inventive live experiences ever – a triumphant mix of theatre, ballet and music that’s constantly surprising.

The stroke of genius is that instead of the usual rock band clutter on stage – mics, drums, amps – there’s just an empty space.

The show kicked off with Byrne singing a new song Here seated alone at a desk.

His 11-piece band slowly joined him, carrying their instruments, all bare foot and in matching suits.

What followed was a thrilling, beautifully choreographed 100 minutes.

There was a big helping of the American Utopia album, Byrne’s poppy, oddly optimistic state-of-nation address, as well as Lazy, his hit single with X-Press 2.

But it was the eight Talking Heads songs that shone most brightly, including I Zimbra, Once In A Lifetime, Slippery People, Blind – brilliantly staged with a single light at the front of the stage throwing up giant shadows of the band – and the wondrous Burning Down The House.

Byrne, whose twitchy, nervous onstage persona was once described as “Norman Bates trapped in a disco”, is a warm, generous star, happy to share the spotlight.

He was at pains to stress every note was played live and made the one political point of the evening – that all this wouldn’t be possible without three immigrant Brazilians in the band.

Then again, the whole point of this show is free movement.

Byrne encored with Dancing Together – from an opera about Imelda Marcos written with Fatboy Slim (in the audience cheering) – and a percussion-only version of Hell You Talmbout, Janelle Monáe’s anti-racism protest song.

If there’s a precedent for this show, it’s Brighton’s very own Stomp but this is in a class of its own.

U2 may have the biggest, most expensive show on the road at the moment but it’s American Utopia that’s Byrneing down the house every night.