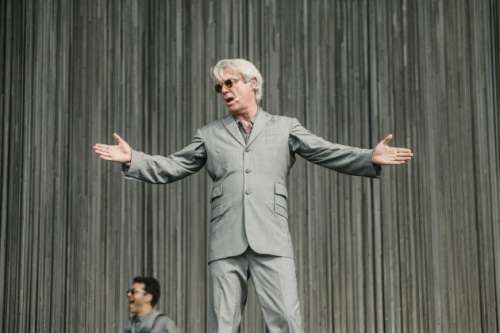 David Byrne‘s American Utopia tour has been of the singer’s most acclaimed live shows of his career, incorporating 12 musicians who all play “untethered” without amps, cables, risers or anything. It is truly something to behold and after a long North American leg, Byrne and co. are now in the UK, with the tour wrapping up at the end of November in Australia. After that, there is a chance American Utopia could, in an altered form, be heading to Broadway. In a new interview in The Guardian (via Vulture), Byrne reveals there is interest from both Broadway and London’s West End:

Byrne is clearly intrigued: he would need to create a narrative arc, to connect the songs, but that doesn’t feel impossible.

“I’ve never done anything like that before,” he says, his eyes widening. And you realise he’s not expressing trepidation or fear, only excitement.

While Byrne has never done anything exactly like that before, he does know something about writing and producing musical theater. Stay tuned.