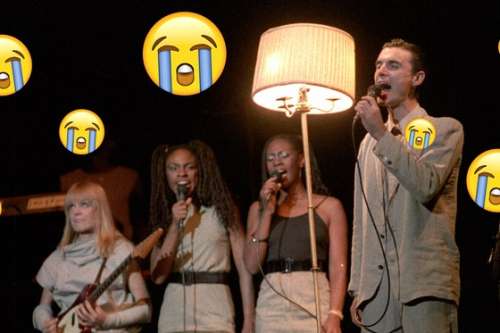 In a promotional video for Stop Making Sense, the Talking Heads’ legendary concert film, David Byrne interviews himself. He sits on one side of the room in his big suit, staring blankly at his interviewer, who is also David Byrne but in different costumes (and, uhhh, blackface). The besuited Byrne gives flat answers to the interviewer Byrne’s trite questions, thoughtful considerations on art and music delivered in Byrne’s alien tone. Sometimes he says he’ll answer “later,” and asks if there’s any food around.

At one point, he asks himself about writing about love. “I have written a love song, though,” he says. “In this film I sing it to a lamp.”

I have already been viciously owned in this very publication for having “This Must Be the Place (Naive Melody)” as my first dance at my wedding. But the reason this "gift to hipster-wedding receptions" felt so fitting is because I’ve never been able to watch Stop Making Sense without welling up the moment Byrne turns to his lamp during the instrumental outro. The tenderness with which he catches it, the light kiss he gives it, as if to remind the lamp it’s the only thing that matters. To paraphrase the meme: Get you a man who looks at you the way David Byrne looks at a lamp.

For a second, as the number starts, the lamp is the only light you see. The stage has been turned into a theatrical rendition of a living room, echoing the “home” Byrne sings of. They’re backed images of a bookshelf, which quickly flicker to intimate images of bodies—an elbow, a full belly, a butt. Things you’d only see after lingering in bed with a lover, spending enough time with their body that it feels like yours. After the mounting drama and movement of the show until that point, it’s a pause that already sets you up for emotional vulnerability.

In a 33 1/3 installation about the Talking Heads album Fear of Music, Jonathan Lethem describes “This Must Be the Place” as having “a lot of sentiment, but the thing that energizes the song is that it’s difficult to get to that sentiment.” It’s a love song in spite of itself. It feels like the singer has had to work for that love and is still wary of it even when there’s nothing to be afraid of. Like it’s the same person wondering, in the next song, if this is really his beautiful wife. Which is why the transition to the dance feels so cathartic. In the same promotional interview, Byrne asks himself: Why a big suit? “Because music is very physical,” he answers, “and often the body understands it before the head.” He may be uncertain in his head, but in his body he knows what love is.

His dance is pure release. It appears vaguely choreographed, a sequence of pushing the lamp to one side and catching it before it hits the ground, righting it and wronging it back and forth. But what gets me is the softness of his face. He starts as Byrne the performer, but there’s a moment where I think I see him break, where he lets his guard down and smiles softly and looks like he’s actually in awe of this lamp. Like he couldn’t care less about anyone else in the room. Either it’s love, or David Byrne is the greatest actor I’ve ever seen.

I think I cry not because I want to be the lamp, but because I want to be Byrne. I, too, live in my head most of the time. I am constantly calculating how much of myself to reveal, and to whom, and worried that happiness is just the state before the other shoe drops. I assume home is somewhere else I need to be, and forget that I’m already there. Watching Byrne break gives me hope that I can let that part of myself out more often and tell the people I love how lucky I feel.

But maybe Byrne had such an easy time opening up to the lamp because there were no consequences. The lamp will never reject him. The lamp won’t be indifferent to his feelings, or respond awkwardly, or tell him it’s too much. The lamp can only be tossed and kissed and righted and adored. Even so, Byrne can love it in spite of himself. He can just listen to his body.