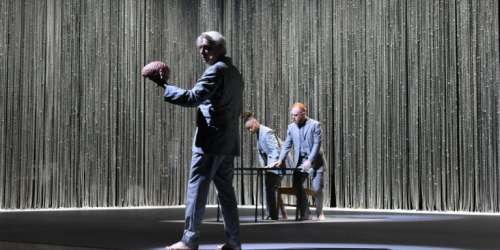 If the live concert experience has to be reinvented, and maybe it does, David Byrne is just the guy to pull it off.

He’s got the credentials – a weird New York art-rock cat who became the intelligent face of the new wave movement with the Talking Heads. Ever since, he tries to do something different, to experiment, to challenge, to provoke, to occasionally get silly and annoy his fans, but more often to delight them. Of course high expectations follow him every step of the way. God forbid he does something conventional, something “normal.”

So now – as hoped – Byrne has done something that’s never really been seen before: A rock show as warm, human and real as it gets, presented with the spectacle and precision of a grand opera.

He and his 11 musicians must have worked very hard to produce the elegant American Utopia tour, named after his ironically-titled new album. For a nearly-sold out crowd at the Jubilee Auditorium Sunday night, it came off as half Brazilian Carnival, half military marching band and half avant-garde musical theatre. Yes, that makes three halves, but there was a lot of talent on that stage. Every detail of sound and sight was carefully choreographed to perfection, its technical sophistication hidden to make it look easy. Humans, not machines, did all the heavy lifting. Byrne made clear early in the show that there was no tracking. “Everything you hear is made by these amazing musicians,” he said.

Can you believe it? The show is a groundbreaker just for that. 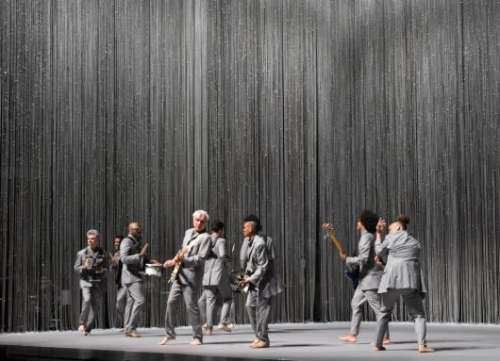 The set was more or less evenly divided between new material and Talking Heads hits, but it didn’t seem to matter. All were greeted with awe. You couldn’t take your eyes (or your ears) off the stage for a single moment. Every song was an enthralling drama on its own: Dog’s Mind, a new one, obviously a shot at Trump, was rendered as a haunting gospel choir. Others as little action scenes, and they never actually touched each other. There was bit of a home theme here. Everybody’s Coming to My House (another new one) plus Once in a Lifetime ­- “This is not my beautiful house!” – and winding up, inevitably, with a rip-roaring performance of Burning Down the House.

Aside from an utterly barren stage curtained with thousands of silver chains, the most striking thing was the band: 12 musicians (including Dave) in identical grey suits, bare feet, playing only instruments they carried with them. No amps. No drum kit. No worries. A team of five percussionists made sure the grooves were hard and strong, rich in the exotic nuances of worldbeat rhythms Byrne has toyed with his entire career. Meanwhile, a lone keyboardist could sound like an entire horn section. The guitarist and bassist held it down. Two back-up vocalists completed the cast. Other band members sang, too, and powerful gusts of four- and five-part harmonies filled the hall. It was a hair-raising experience.

On top of the playing, there wasn’t a single moment where even one of musicians wasn’t involved in some kind of choreographed dance routine. Some were quite eccentric. At one point, the lights went up with all of them dead on stage – each being slowly revived as the song built to a frenzy. At other times, they literally did formations like a marching band. The impressive lighting matched the perfection of the show. Did they really have 12 follow-spot operators?

They were going for it, Byrne singing his all, at 66 a pretty good dancer. Only one or two times did it threaten to go off the rails – as it should. That’s what every good performing artist should strive for: Risk everything, live on the edge, dare to be different.

First it must be mentioned that each of this British artist’s many talents could equally take him to success: Musical theatre – sure. He’d kill on the “West End.” He’s also an incredibly strong rhythmic piano player who’s not afraid to pound the crap out of the thing. He’s a great singer with a ridiculous range. So what does he do? He tries to out-weird David Byrne – and succeeds.

This was more like performance art. Making an impression with his appearance – black guy with a white cowboy hat, blue overalls and bare feet (in keeping with the theme) – the headliner even gave him his own set design: Stately white pillars. At the front, next to a grand piano, stood a naked pregnant mannequin, and also a naked baby mannequin with missing arms, and body parts strewn around. This was the subject of a strange bit he did later on that lasted for about three minutes. Stranger still was a schtick where he and his bandmate launched into a vocal mantra of two nonsense words – for four minutes. Crazy.

Some of the act was pretty funny, yet one longed for a more serious and organized treatment of Clementine’s original music, some of which was astounding: a witty combo of cabaret burlesque, spoken word, rock ‘n’ roll and classical music – at least until he sabotaged it with “performance art.” He makes Reggie Watts look like Michael Buble.