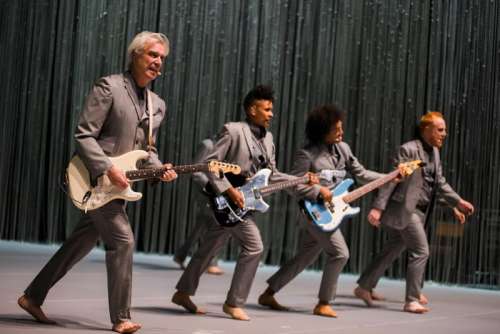 Forgive the sports metaphor, but David Byrne knocked this one out of the park. Coming out of the concert at the Eventim Apollo, you felt that the presentation of popular music had changed - that to go on stage with a conventional band with the usual clichéd movements - everything from the wince of a complicated guitar solo to the vocalist waving to the crowd to join in - all should be banished to history’s dustbin. Likewise the whole set up on stage was new - Byrne’s band were entirely untethered to wires and able to move around the stage in complete choreographed fluidity.

It is true Byrne has been almost critic-proof by virtue of his intelligence, curiosity, sense of humour and aesthetics. That doesn't mean all his solo work has been universally terrific, but here he played the best bits of the solo albums, including several from his latest and probably best, American Utopia, and could rev-up the crowd, if they needed further pleasing, with several Talking Heads classics.

Stop Making Sense is for many the ultimate live concert film - here, at the age of 66, Byrne attempted and pulled off a remarkable coup: just maybe this was even more fully realised as a theatrical and musical event.

The cultural depth charge that blew up in Manhattan when Talking Heads emerged in the mid-1970s was where art and popular music were more than usually mixed. While the impressive choreography of the show was credited to Annie-B Parson - Byrne is someone who can talk with knowledge about Robert Wilson, Merce Cunningham, Eduard Lock or Brecht, and all of them informed the show. Like Warhol, Byrne plays with making the insignificant significant and vice versa. Strange perspectives that jolt the senses. Performing a song like “Blind”, it could have been some theatrical magic conjured by Robert Lepage with huge shadows cast like a contemporary puppet play.

He used elements we have seen before - the stumbling backwards, the Evangelical preacher moves - but he recognises what is lacking in the merely cerebral and has borrowed from Africa, from funk, from religion to balance spiritual and trance elements with the brainy stuff. In that sense his American Utopia is inclusive of all kinds of American music and cultures and is by its nature a subversive act in the current climate. While he has experimented with African and numerous other global musics in albums such as My Life in the Bush of Ghosts or Fear of Music - the focus here was almost all North American.

The lighting and curtains were flexible enough to be grey and alienating one moment, but conjuring up a glamorous night-club at others. The set up was impressively flexible - disco for "Dancing Together" from the musical Here Lies Love (words by Imelda Marcos) and dance music for the irreproachably catchy “Lazy”. “Like Humans Do” had an early Sixties doo-wop feel with circles of light and those old-style group moves. Then of course he has a terrific back catalogue of show-stoppers, the likes of “Burning Down the House” and “Once in a Lifetime”, in wihch the team were lined up in a row like a Hollywood poster for a gang movie.

While Byrne has apologised for including no women on his album, there were a couple on in the 11-piece band live, it was as though he had recruited his own sports team or marching band. He also clarified that all the music was live. The sheer precision was so meticulous you assumed someone at least must have been working to a click track.

The encore included “Hell You Talmbout,” Janelle Monáe’s 2015 protest song that lists the names of deceased victims of police brutality. Byrne chuckled sometimes throughout the evening when things went right, as if to say to himself, and us, how great that he had pulled this off. A delightful, inspired evening.