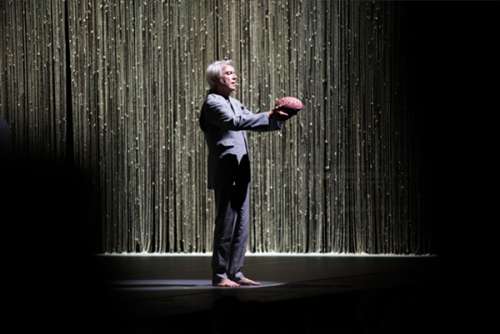 The curtain lifts to reveal a naked stage, save for a simple table, chair, and an anatomical model of the human brain.

This is but par for the course when it comes to a David Byrne concert — the legendary Talking Heads frontman and visionary whose Friday night performance at the Fox Theatre was a roving display that jostled the dial between concert, performance art, and a contemporary— albeit indirect — commentary on our collective sedentary pitfalls. David Byrne and company delivered a once-in-a-lifetime performance. No, really.

Emerging from the three-sided beaded curtain one-by-one, Byrne was joined by his incredibly agile 11-piece band, each in matching grey suits, all barefoot, with not a single stationary instrument in sight. This allowed for everyone to float, stomp, and shimmy freely though within the detailed precision of choreography and the thoughtfully balanced 21-song set, which spanned solo work, Talking Heads hits, and string of special moments that would be foolish to try to explain two-dimensionally. An extension of Byrne’s artistic legacy, his performances are meant to be experienced live and fully alive. 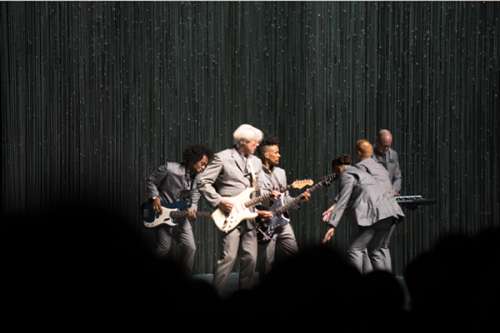 Spreading like some airborne intoxicant, it was "I Zimbra" from 1979's Fear of Music that forced the audience from their seats into their own noodleymovements. Though the set spotlighted 2018's super self-aware American Utopia with "I Dance Like This" and "Dog's Mind," there was no isolating moment. Fans whose knowledge is limited to greatest hits and those who are well versed in the six-degrees of Byrne (Brian Eno, Tom Tom Club, Fatboy Slim, Modern Lovers) were all appeased, because each moment was rehearsed to feel irreplaceable — among them were an a capella extension of "Everybody's Coming To My House" delivered by his friends from the Detroit School of the Arts youth jazz ensemble.

But it was "This Must Be The Place (Naive Melody)" and "Once In A Lifetime" which served as the evening's perfectly packaged centerpiece. Meanwhile, "Burning Down The House" felt more cathartic than ever.

In keeping with the thematic narrative, Byrne offered several nods to Stop Making Sense imagery for the night’s “Bullet,” during which Byrne stood holding a lamp. Mammoth shadows appeared behind the band for Talking Heads’ spastic 1988 track “Blind” as, perhaps, an ode to Byrne’s iconic “big suit” worn during the 1983 concert film. 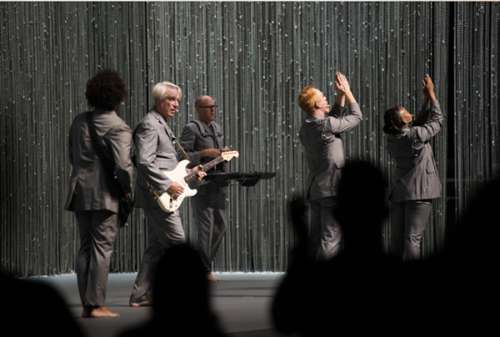 Byrne touched on his collaboration with St. Vincent via a strobing "I Should Watch TV" and delivered a sunny cover of Brighton Port Authority's “Toe Jam," but it was the show closer that abandoned the set's foundational surrealist whimsy leaving the audience shook. An updated version of Janelle Monae's blistering protest track "Hell You Talmbout" which lists the victims of police brutality, calling upon the audience to repeat each of their names out loud served as a poignant example of Byrne's ability to remain relevant and reverent while maintaining a timeless air of substantive style.

Without little investigation, one could assume that Byrne has a bit of an obsession with the idea of "home." Whether he is finding home within another person, planet, exploring it through the eyes of a four-legged friend, or just burning the whole damn thing down, as rock's most beloved weirdo and most generous host Byrne continues to extend an invitation into his. Just remember to take your shoes off, and don't look back.