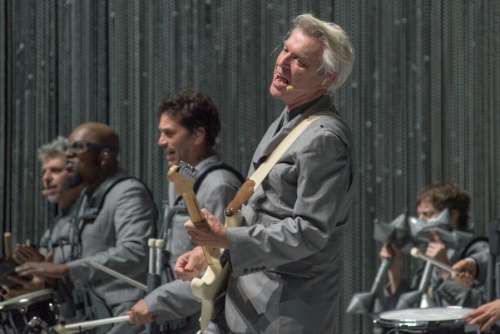 To the crowd from the ’80s he’s the Talking Heads mastermind and Brian Eno’s buddy; to the ’90s kids he’s the singer behind the hilarious dance-floor hit “Lazy”; to millennials he’s the St. Vincent collaborator. And last night the many generations at the sold-out Queen Elizabeth Theatre in Vancouver were united in their almost deafening cheering and applause for David Byrne. 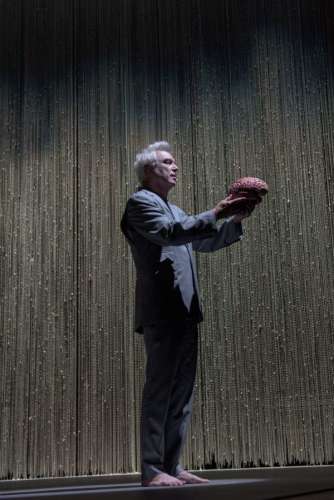 Sixty-six-year old Byrne’s new show is in support of American Utopia, his first truly solo effort in the past 14 years. Yet, the set list was heavy on the Talking Heads hits, as well as random picks from the extensive back catalogue of the ever-evolving experimenter. However, its utopian element only revealed itself in the very end.

With its visually minimalist all-silver setting, the concert gave centre stage to the outstanding musicianship of Byrne and his 12-strong barefoot band.

The concert opener – “Here” – featured Byrne on the stage alone, examining a plastic brain in his hands. The almost Hamlet-like scene suggested an evening of introspective contemplation. Yet, the heavy beats kicked in just a couple minutes later, and by song no. three everyone in the audience simultaneously jumped off their seats, to never sit down again that night. 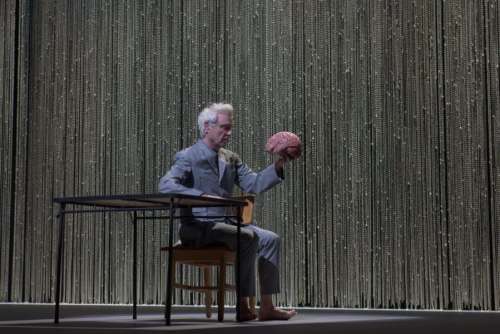 One can only imagine the amount of technical work put into the show, considering even a minor element of it took over an hour to rehearse. The effortlessness of musicians swaying and dancing around the stage with instruments strapped to their custom Kenzo suits was mesmerizing to watch. Even the drum set became portable – it had to be divided between six percussionists.

Not a man of many words or emotions, Byrne was humbly thanking the audience in-between the songs, and only once took a long enough break from singing to talk about the importance of voting in local elections.

He is, indeed, cautious with his political message. While easy to read as a commentary on Trump’s rule, Byrne’s intention with American Utopia, in his own words, was to depict the country as he’s known it since moving there as a kid. Indeed, even at 66 Byrne still sounds like a naive adolescent trying to make sense of the world. Or pretending he hasn’t figured it out. Still, songs like “I Should Watch TV” and “Dog’s Mind” can hardly be more relevant in the context of corporate rule and fake news, while “Home” can be read as a white society grappling with immigrant influx. 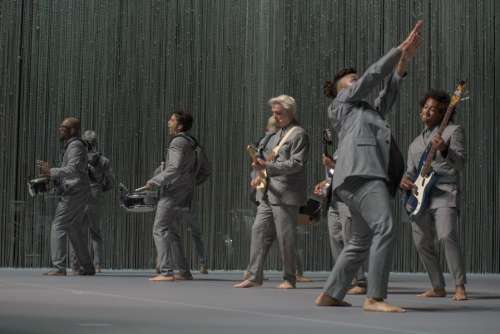 The childish naivety and good-naturedness, and adult irony were well balanced throughout the show. For every gospel-like line “Every Day is Miracle,” there is a second line “Every Day is an Unpaid Bill.” Byrne’s second encore was a cover of Janelle Monáe’s 2013 “Hell You Talmbout,” an intense recitative with the musicians shouting out the names of young victims of racial violence in America.

Before the song, Byrne lamented about having to update the name list each time he had to perform the song. Two Canadians – Tina Fontaine and Colten Boushie – were added to the list last night. This was the most powerful and sobering balancer of the show that otherwise could have gone down as a glittering celebration of life.