— One of the Dayton area’s biggest events got a major shout-out from a Rock and Roll Hall of famer this weekend.

A local charity also got a little love.

“I was here a couple of years ago, two or three years ago, for the Winter Guard world championships held in the Dayton area,” he told the cheering crowd. “I did a project that mixed color guard teams from different places with bands like myself and other musicians. So I was immersed in the color guard world for a little while there, and it all leads to Dayton. Sorry, if you are not from Dayton, you may not know what the hell I am talking about.”

Portions of Byrne’s 2016 film “Contemporary Colors” were filmed at the competition, one of the region’s biggest events, according to the Dayton Convention and Visitors Bureau.

Officials estimated last year that the competition has a $19 million impact on the local economy.

It seems the color guard world may have had an influence on Byrne’s high-energy “American Utopia” tour.

All instruments played during the visually striking show were wireless and without stations, including electric guitars and drums.

Byrne and his band, all barefoot, played and sang during synchronized and theatrical movements.

In the run-up to the concert, Bryne posted about reading about the House of Bread community kitchen’s recent dining room expansion at 9 Orth Ave. in Dayton. 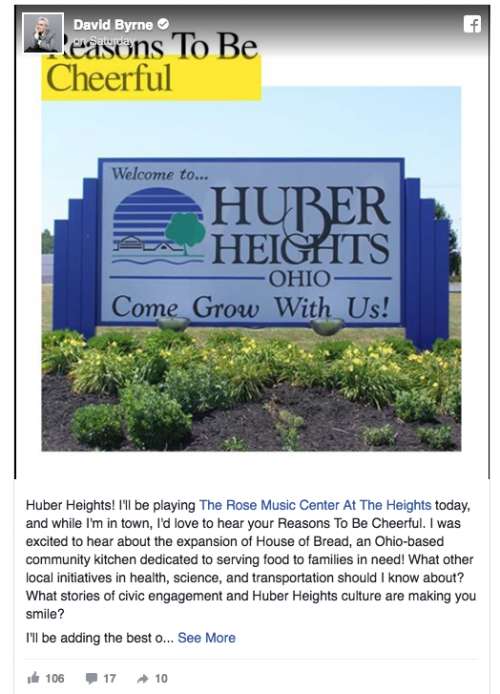