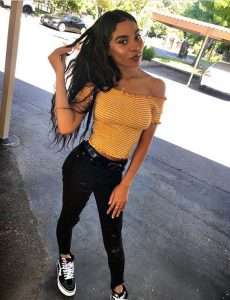 Photo: Courtesy of the family of Nia Wilson

Wilson’s memory was part of the message David Byrne wanted fans to walk away with during the first night of his two-date stint at the Fox Theater in Oakland on Thursday, Aug. 16.

During a second encore at his more than hour-long concert, the 66-year-old musician and former front man of Talking Heads paid his respects to Wilson, the 18-year-old Oakland woman stabbed to death on July 22 at the MacArthur BART Station, during his rendition of “Hell You Talmbout,” a 2015 protest song by Janelle Monáe (who recently wowed festivalgoers at Outside Lands just five days ago despite a bout of food poisoning). Byrne said he watched Monáe perform the song at the 2017 Women’s March and was given permission to update it throughout the years.

“Nia Wilson. Say her name,” was chanted by Byrne and his band, along with the names of other slain African Americans like Trayvon Martin, Freddie Gray and Sandra Bland.

The song wasn’t a surprise, as Byrne has been performing the cover during his “American Utopia” tour, but it certainly resonated a little more with the Bay Area crowd.

It was a powerful ending to a set filled with hits from Byrne’s prolific career with the Talking Heads and beyond, from 1983’s “Burning Down the House” to 2018’s “Everybody’s Coming to My House.”

Byrne is scheduled to perform again at the Fox Theater on Friday, Aug. 17, before moving on to San Jose’s City National Civic and the Community Center Theater in Sacramento.