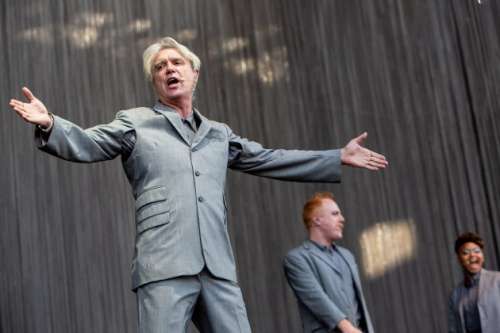 David Byrne has been on an acclaimed “untethered” world tour in support of his 2018 album American Utopia throughout much of the year. This week, that tour makes its way to NYC for three shows followed by one in Philadelphia. The Kings Theatre, Brooklyn shows on 9/16 and 9/17 are sold out, but tickets are still on sale for the Saturday, 9/15 show in Queens at Forest Hills Stadium (a venue he last played 35 years ago).

In Philly, tickets are still on sale for 9/20 at the Mann – and you can enter to win a pair of tickets. Tune-Yards opens all four dates.

Meanwhile. David shares a playlist each month, and the September edition is called “Conscious Dance.” He writes:

Writing songs that deal directly with social justice and contemporary issues is hard—at least it is for me. I feel like I often manage to approach these things in a round about or indirect way. When I want to pontificate or give my opinion or analysis on a particular issue, I often do it in a blog post or newspaper op ed rather than in a song. My sense with my own writing is that music and songs can do wonderful things—allow people to feel empowered, less alone, part of a community—but maybe they’re not so good at arguing a specific social or political point.

Others have proved me wrong. I think of Bob Dylan’s “Hurricane” which was like a kind of reportage. The Specials—lots of their songs, but “Free Nelson Mandela” stands out. Peter Gabriel’s “Biko”. The common thread in those songs and many others—in a lot of hip hop too—is a personal story where one person’s story stands for a wider injustice.

The Janelle Monae song I am performing on my current tour is a little bit like that—the tragic deaths of the individuals named in the song stand for a larger injustice—which then doesn’t have to be underlined. It’s obvious.

I also think of the songs in this playlist—songs with irresistible dance grooves and great melodies that didn’t shy away from looking at the world while also imagining what a better world could be. They’re mostly, though not all, from a particular era—the 70s—a formative musical era for me. Hearing these incredibly catchy songs made me realize pop music could be danceable and conscious at the same time. (A lot of rock music had a lot to say, but not all of it was as brilliantly good for the feet and body at the same time as this stuff). These songs are hugely inspirational even if I might have to continue on my search of how to do this in my own way.

“Conscious Dance” includes songs from Gil Scott-Heron, The Temptations, Marvin Gaye, Sly & The Family Stone, Prince and more. You can listen to it here.