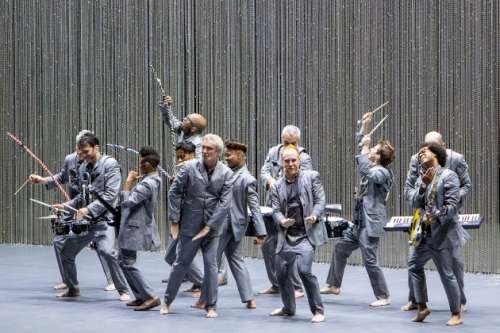 “I have been on this stage before, but it was a long time ago,” David Byrne said in a brief pause between songs at his Saturday (9/15) night show at Forest Hills Stadium in Queens. Just over 35 years ago, in August of 1983, Talking Heads performed two shows at the venue, during their “Stop Making Sense” tour. Later the same year, the band filmed three nights of shows at Hollywood’s Pantages Theater, resulting in the heralded concert film Stop Making Sense. For his 2018 solo album American Utopia, Byrne envisioned a show as ambitious as Stop Making Sense – and with his “untethered” world tour, he’s achieved it.

The chorus of American Utopia single “I Dance Like This” repeats, “we dance like this, because it feels so damn good.” That line is a good summation of the theme of the entire show: the joy in movement. Byrne and his troupe of musicians and dancers (who are, he confirmed partway through the set, absolutely playing live: “everything you hear coming off this stage is being played by these incredible musicians”) move in closely choreographed forms and lines, but with less military precision and more the natural rhythm of a tight, in-tune band. The staging is a little marching band, a little color guard, a little dance team; Byrne himself is part band-leader, part conductor, and part instigator. He frequently steps back from center stage to give other band members the spotlight, and in their matching grey suits and bare feet, the whole group comes across as a band as egalitarian vision.

With such a deceptively simple set up – no props, or risers, or anything on the stage, just a group of people in motion – it was small details that really made Saturday night’s show compelling. During “Blind,” a single bright light cast gigantic rippling shadows of band members as they ran across the stage, turning them into a troupe of giants, reminiscent of moments from Byrne’s Love This Giant tour with St. Vincent. For “Doing The Right Thing,” four drummers just poked out through the beads marking off the edge of the stage, followed by a fifth figure: a single tapping foot. The lights went down entirely before “I Dance Like This” and came up on everyone on the floor except one drummer. They gradually came to their feet, creating a circular conga line that spun out into each band member dancing in their own little circle of light. It was a rare show that looked as good from the upper bowl, where one could watch the whole intricate staging play out, as from the front of the floor.

Much has been made of Byrne’s decision to end each show with a rendition of Janelle Monae’s protest song “Hell You Talmbout,” and it was just as moving in person as accounts I’d read. Merrill Garbus of opening band Tune-Yards joined Byrne’s band as they chanted the names of black lives lost to police brutality, and it gave me chills, all the more in contrast to the joyous dancing scene in the crowd earlier for beloved Talking Heads classics like “Burning Down The House,” “Once in a Lifetime,” and “This Must Be the Place.”

Check out pictures from Saturday night’s show in the gallery above, and the setlist, as well as a few video clips, below. David Byrne has two more NYC shows coming up at Kings Theatre – both are sold out – and then he heads to Philly to play the Mann on September 20. Tickets are on sale, and you can enter to win a pair.

Setlist: David Byrne @ Forest Hills Stadium, 9/15/2018
Here
Lazy
I Zimbra
Slippery People
Dog’s Mind
I Should Watch TV
Everybody’s Coming to My House
This Must Be the Place (Naive Melody)
Once in a Lifetime
Doing the Right Thing
Toe Jam
Born Under Punches (The Heat Goes On)
I Dance Like This
Bullet
Every Day Is a Miracle
Like Humans Do
Blind
Burning Down the House

Encore:
Dancing Together
The Great Curve