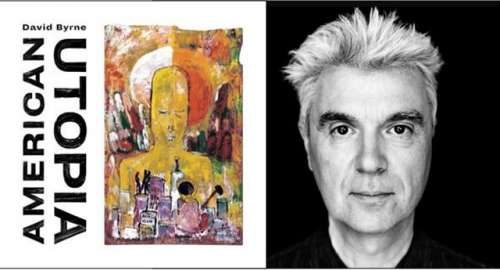 There was a time a few years ago when I was standing in line at a restaurant in New York, and standing next to me was David Byrne. He was wearing a light suit; his shock of grey hair looking right at me. Dare I talk to him? The man’s a genius. But I did, figuring: hang it, one seldom finds oneself in the presence of legend.

“Pardon me, may I just say I admire your music very much.”

“Thank you, that’s very kind of you.”

We had a moment, and that was it. I was then shown to my seat, me and then-fiancée had steak and fries, and then David Byrne came by and sat at the table next to us. I get it, Psycho Killer, but we’re not here to mingle. Leave us alone.

David Byrne’s never been one to shy away from sharing his unique vision. It comes in all shapes and sizes, and we – all of us – have been quick to embrace the more perplexing aspects of his worldview. Less movie trailers underscoring the male journey to self-discovery underscored by Once in a Lifetime would be good. In this modern world, beset with all manner of terrors, it’s an interesting journey for Byrne to take. Thus, American Utopia – co-produced and co-written in part with Brian Eno, with whom he also pulled together the splendid Everything that Happens will Happen Today. This new outing is quirky, interesting, skewed to the weird and sometimes sublime… in short, everything you could ask for from David Byrne records.

Album highlights include the strangely dark satirical piece Bullet, a song telling the journey of said item from the bullet’s point of view, and Everybody’s Comin’ to My House, which defies description in terms of narrative intent and will doubtlessly take multiple listenings to figure out. Still a highlight, though. Doing the Right Thing is a weird electronic fever dream, while I Dance Like This has the flavour of nightmares more so than pleasant dreams. Every Day is a Miracle strikes as more inspiring – hence the title – and it ends up sounding inconsistent with the rest of the album’s tone. Maybe that’s the point, too.

A new delivery from David Byrne is never not interesting, be it for good or ill. The moments of magic on American Utopia more than make up for those moments which are … think pieces. But the mixed bag of content is nothing if not interesting.

For the record, he had the same meal as me at that New York restaurant.