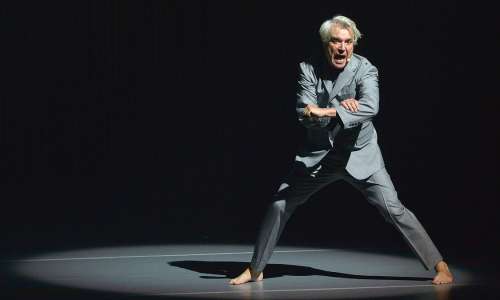 At the end of last year, David Byrne posted a tweet claiming that his forthcoming world tour was “the most ambitious show I’ve done since the shows that were filmed for Stop Making Sense”. On one level, that’s just a smart way to drum up business. If you’re a left-field rock star 40-odd years into your recording career, it never harms to compare your latest work to a high watermark from your glorious past, and the 1984 Talking Heads movie is one of the few concert films in pop history that anyone other than a diehard fan might consider watching: a Jonathan Demme-directed riot of stylised dancing and constantly expanding suits that critic Pauline Kael called “close to perfection” and likened to the work of Jean-Luc Godard.

But watching Byrne and his 11-piece backing band barefoot and besuited, you have to concede he also has a point. The show is incredibly ambitious. The musicians – who Byrne is keen to emphasise are playing everything live, without the aid of backing tracks – are in constant motion on a bare stage, no amplifiers or drum risers: the percussionists perform with their instruments around their necks, like a samba band, as does the keyboard player, which makes him look a little like a cinema ice-cream vendor. Their every movement is choreographed, sometimes in a familiar way – Byrne’s performance of Talking Heads’ 1980 hit Once in a Lifetime is clearly based on both its famous video and the opening of Demme’s film, where he flung himself around to the beat of Psycho Killer as if being shot – and sometimes in a manner that’s more puzzling. It isn’t entirely clear why, at one point, Byrne starts rolling up his left trouser leg mid song, but it certainly adds to the general air of otherness. 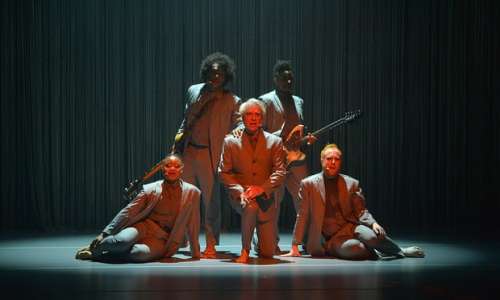 It’s not an approach without risks. A rock show where even the way the backing singers stand between songs is choreographed runs the risk of feeling a little dry, and there are a couple of moments when the band, striding around the stage, all smiles, worryingly resemble participants in a jukebox musical based on Byrne’s oeuvre. But it’s more frequently disarming. The staging of Blind, a dense, writhing track from Talking Heads’ final album, Naked, is both incredibly simple and incredibly effective: the band stand in a line, illuminated by a single, powerful footlight, casting vast, looming shadows at the rear of the stage. The show works best when the precision of the staging chafes against visceral, urgent music, when the setlist delves into Talking Heads’ percussion-heavy, perspiration-soaked Afro-punk-funk zenith: you’re reminded what extraordinary songs Born Under Punches and The Great Curve are, how smartly they melded genres, too funky to feel cerebral.

The material from Byrne’s most recent album, American Utopia, is a different matter entirely. Behind the South American percussion battery, the songs often sound like the work of his fellow New Yorkers, indie band the Magnetic Fields, albeit with their dolorous lyrical sarcasm replaced by something more whimsical: “The chicken thinks in mysterious ways.” If the staging can’t convince you that this stuff is the equal of what Byrne was writing in 1980, it can certainly potentiate it. The jarring musical shifts of I Dance Like This, a song quite annoying on record, are brilliantly played up: strobes flare, the dance routine continues unabated during one lengthy silence, the effect charming rather than infuriating.

But for all the clever staging, it ends with something basic and powerful. Byrne and band cease the choreography and perform Janelle Monáe’s Hell You Talmbout, a chanted listing black Americans killed by police and vigilantes. It’s both potent and a riposte to anyone who thought American Utopia’s vision of the US might be a little too playful and arch for its own good, given the current climate, and it works: an austere finale to a strange and entrancing evening.