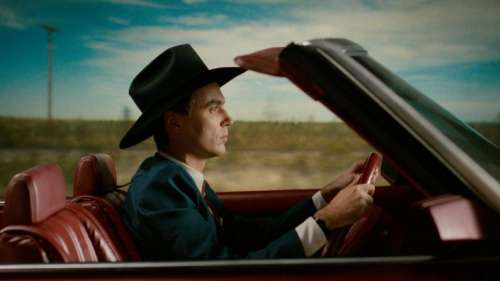 Longtime New York resident David Byrne, coming off one of his most successful tours in years, looked back at one of his earlier artistic triumphs at the IFC Center last week. His 1986 film “True Stories” has been remastered and reissued by the prestigious Criterion Collection, along with a new album collecting, for the first time, all the music from the movie in one place.

“I have a lot of friends here!” Byrne said, taking in the crowd before the victory-lap screening.

The Scottish-born, Baltimore-raised leader of the band Talking Heads was at the height of his mainstream popularity when he directed the not-quite-a-musical “True Stories.” In it, Byrne, then best known as the oddball rocker behind “Psycho Killer” and “Burning Down the House,” wears an enormous cowboy hat and surveys the expanding suburbia of the fictional town of Virgil, Texas. He chats up a bizarre cast with traits Byrne had collected from supermarket tabloid headlines.

Spalding Gray and Annie McEnroe play a married couple who haven't spoken to one another in years; Swoosie Kurtz is a woman so rich she never gets out of bed; and John Goodman is a lonely man who advertises for a wife on TV. These rough ideas, plus a wall of drawings and newspaper clippings representing images that Byrne knew he wanted to visualize, were eventually hammered out into a screenplay with the help of playwright Beth Henley and actor Stephen Tobolowsky.

The climax of the film, a talent show, is a concept Byrne isn't finished with.

“It's a disappearing format,” he said of variety shows like the one he organized last year at The Town Hall called “This is How Music Works.” “It's inclusive and entertaining and if you think, 'I don't care for this act,' it's only going to be another five minutes.”

Byrne discussed how it was director Jonathan Demme's generous attitude that convinced him he'd be able to make his own movie. The Academy Award-winning director was editing Talking Heads' concert film “Stop Making Sense” and encouraged Byrne to make suggestions.

While “True Stories” never won any major awards, Byrne did receive recognition from the Texas Accordion Association for putting together a band for a big parade sequence.

“They were appreciative of the work I was doing on behalf of local accordion players,” Byrne said.