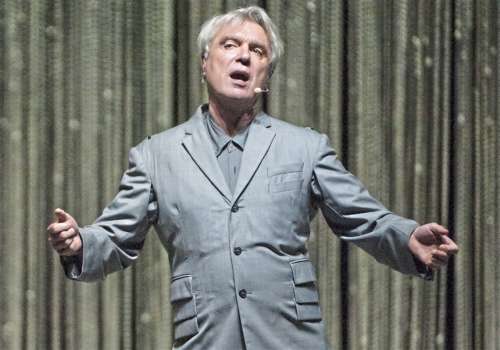 Not only does he turn like a wheel inside a wheel, sometimes David Byrne reinvents it.

The art-punk icon arrived at the Benedum Sunday night on the American Utopia Tour -- he could have called it No Shoes Nation, but that was taken -- with a production unlike anything we’ve ever seen before.

Like he did in the same building in 1983, when he took the stage alone on the Stop Making Sense tour with Talking Heads, Byrne appeared solo, this time sitting at a table on an otherwise bare stage surrounded by a gorgeous metal string curtain, holding a model of a human brain. He started...at the end, with “Here,” the closing statement on “American Utopia,” his first solo album in more than a decade.

“Here is many sounds for your brain to comprehend,” he sang over an electronic blare. “Here the sound, it's organized into things that make some sense.”

Along with no shoes, there were no cords, no amps, no kits, no tethers. When his 11 backing musicians took the stage, in matching gray suits (no oversized shoulder pads), they played what they could carry -- guitar, bass, keyboard and seven percussionists rolling out an endless array of exotic, even homemade-looking contraptions.

Every step by every band member was precisely choreographed, with the the 66-year-old frontman (happy birthday, David Byrne!) assigning himself the most rigorous tasks. He could be spending these golden years chilling at a mike. Instead, he’s up there doing light aerobics for almost two hours, pulling out of a lot the signature Byrne bends and stretches.

Despite not having a drum kit, a bank of keyboards or guitar pedals, the songs sounded even bigger and better than the recordings, and that goes for the many Talking Heads classics, including “Once in a Lifetime” and “Burning Down the House,” which had fans jumping to their feet to join them. His vocals, with all their ticks and yelps, were spot-on without any dropping of keys.

It couldn’t have been all live, right?

“Three weeks ago in San Antonio, Texas,” he said, “someone asked me, ‘Are you really playing or are these just tracks?’ Everything coming off the stage is being played by these musicians.”

Among them were two energetic and very different-looking sidekicks -- one an African-American woman, one a slightly awkward red-haired gent -- dancing and doing backup vocals and a young guitarist who looked like Prince and used his handful of solo chances to step forth and rip like him.

They did seven songs from “American Utopia,” an album that comments on modern times in a highly interpretive manner, from the grim “Bullet” and the cerebral “A Dog’s Mind” to the possibly joyful “Everybody's Coming to My House” and “Every Day is a Miracle,” a pair of songs that popped like classic Talking Heads.

On the edgier side was “I Dance Like This,” culminating in a blinding strobe effect, and coming, perhaps, with Byrne’s own review of the production: “We dance like this/because it feels so damn good/If we could dance better/well, you know that we would.”

No one came for Beyonce’s dancing skills, so it was just fine.

From the recent back catalog, he tossed in the exuberant EDM workout “Toe Jam” and avant-funk “I Should Watch TV” (from the St. Vincent project), but it was clearly the Talking Heads faves -- “I Zimbra,” “Slippery People,” “Born Under Punches (The Heat Goes On)” and “Blind” -- that resonated most with the crowd.

With rare exceptions, like the red fog on “A Dog’s Mind,” they favored a monochromatic grey-blue look, making the burst of color on the closing

“Burning Down the House” even more of a happy release.

The energy extended into the encore which included the polyrhythmic attack of “The Great Curve” and ended with “Hell You Talmbout,” Janelle Monae’s tribal protest song that shouts out the names of African-Americans martyred on the streets.

Throughout the tour and in the aftermath of this performance, “best concert ever” raves have been bouncing around on social media, though one companion declared it boring, colorless and joyless.

Maybe both are understandable, depending on why you came. Always challenging the norm, Byrne staged an intense theater piece mostly meant to be watched, building something of an invisible wall between himself and the audience. It’s entirely possible that a pure celebration of the songs -- Talking Heads-reunion-style -- would be more fun and interactive for the fans.

Instead, he upended the notion of the rock concert, creating something unforgettable and bound to be duplicated by artists generations younger.

I Should Watch TV

Everybody's Coming to My House

This Must Be the Place (Naive Melody)

Once in a Lifetime

Born Under Punches (The Heat Goes On)

Every Day Is a Miracle

Burning Down the House