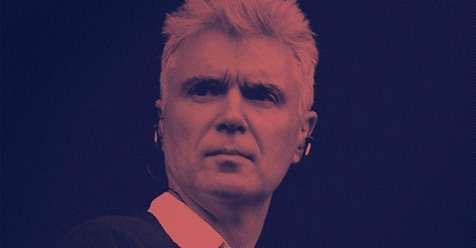 A couple of years ago, former Talking Heads frontman David Byrne found himself being hit by wave after wave of bad news. “I’d get up in the morning, read the paper in bed, and it would really put a damper on things,” he says. “I ended up angry, depressed, and furious.” Rather than being swept under by the growing tide of despair, Byrne decided to take stock and began collecting reports that made him feel optimistic about the future of humanity. “For my own mental health I needed to do something,” he explains.

Taken from the Ian Dury and the Blockheads song of the same name, Reasons to Be Cheerful is a website and lecture series about positive news stories—good ideas from around the world that prove there are better ways. Contributing writers like Brian Eno examine how we can innovate ourselves out of existing problems, whether they’re related to climate, culture, education, or public transportation. “People blather on about how to fix the U.S. healthcare system when there are about five different options, like Germany’s or Britain’s, that work better than the one we’ve got,” Byrne tells me. “The problem is that politically it’s a can of worms.”

The common thread running through all these stories is that they shine a light on our ability to learn and evolve. A testament to human progress, they encouraging us to keep looking for solutions, because good ideas work. “It says something about us that we have the ability to be flexible and adjust our beliefs in a way that is very nice,” Byrne explains. “I don’t think dogs or cats can do that.”

Despite being a tough year for good news, 2018 had its fair share of positive moments. In October, India’s decision to decriminalize homosexuality heralded a seismic change. “It’s really been a forbidden zone since the British took over, but it’s turning back little by little,” Byrne says. He notes that Portugal, which refused to implement austerity measures after the 2008 financial crisis, came back from the brink of economic disaster, showing that gutting public services isn’t the way to appease creditors. “I think [austerity measures] have had a huge political effect in the U.S. and abroad,” Byrne adds. “People’s lives have been decimated.”

Over the past 12 months, one of the gloomiest topics has been climate change, and the refusal of many U.S. elected officials to even acknowledge it’s happening. For many, extreme weather events have brought home the severity of the issue. “It makes you want to walk out into the ocean and drown yourself,” Byrne says despondently, “but occasionally there’s something that bucks the trend.” Take the Republican Mayor of Georgetown in Texas, who turned his city into the largest place in the U.S. to be powered entirely by renewable energy. “It’s really encouraging to see that someone can break with the prevalent ideology in their party and just say, ‘I’m going what is the most financially beneficial [solution], to hell with ideology,’” Byrne says.

Reasons to Be Cheerful is very much a labour of love. When I speak to him, Byrne has only been home a mere 48 hours following a world tour, and he’s already thinking about the next story. “Now that I’m back I can start working from my little office and start editing what needs to go up,” he says. It all began from a very small PowerPoint presentation Byrne toured around a few venues in Brooklyn, London, Berlin, and Copenhagen. “It wasn’t a super-slick TED talk or anything like that,” he says. “But it did give people a sense that not everything was going to hell in a handbasket.” Once he had accumulated a body of stories, it became apparent he was gravitating towards certain types of reports—anything that hinted at alternative systems or approaches to societal problems. “At first I didn’t think much of it,” Byrne recalls. “If I saw something that seemed hopeful I’d just toss it in there.” Not wanting to promote one-offs or flukes, Byrne decided he only wanted sustainable examples that could be used across the world. “Like if a billionaire donates to a hospital, that’s not a sustainable model,” he says.

After spending a whole year diving into stories that didn’t necessarily make the front page of national newspapers, Byrne has a great standing point from which to predict the upticks we might see in 2019. “I’m not putting a whole lot of faith into politics these days,” he says. “But it is encouraging that a people who wouldn’t think they could succeed in the political arena have decided to jump in.”

This most important thing to him is that people get involved. Community gatherings, singalongs, local politics—whatever, as long as “they get their faces out of their screen for a bit and actually relate to one another,” he says. “I think it could happen.”