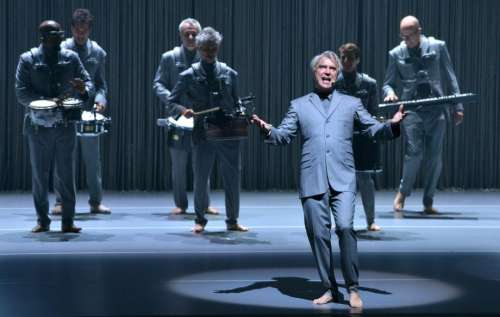 Often pegged as a bookish pop prodigy, David Byrne’s decision to kick off his UK ‘American Utopia’ tour in Oxford seems somewhat apt. The queues are packed with pasty, balding nerds who look fresh from a library, and the comfortable seats of the New Theatre play host to more than a few dodgy backs. It takes mere minutes for that starched-shirt atmosphere to lift, though, as people leap to their feet for second track ‘Lazy’, the usually prim and proper theatre setting instead coming off like a packed-out disco.

Before that, Byrne takes to the stage alone, the stage curtain dropping and revealing the former Talking Heads man sat at a table. A frame of gold beads surrounding the stage is slowly hoisted up – a pared-back stage set-up which will come into its own as the night progresses – as he leaps to his feet, plastic human brain in hand, addressing the crowd directly and dissecting the fake organ, all to the pensive storytelling of ‘Here’. It’s a showy start, setting the tone for an evening that deconstructs the very notion of what a concert can offer. 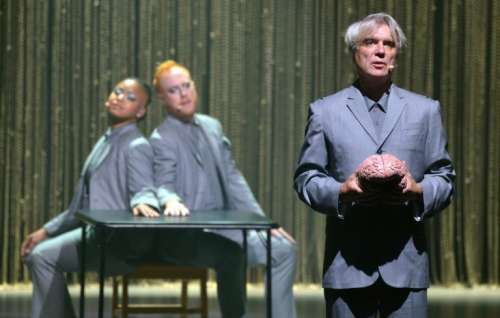 Byrne is joined tonight by a 12-piece live band, all of whom are barefooted, suited-up free agents, roaming around the stage with their instruments attached to their hips. At times stringently choreographed, and at others seemingly scurrying about the stage of their own accord, they all wear a beaming grin-near permanently. They duck in and out of that aforementioned curtain of gold beads, changing position like American football players enacting a particularly methodical play. It’s a show that blurs the lines between gig and theatre, poetry and dance; a full spectrum of culture under one roof. It’s all impossibly slick, no one putting a foot out of line, and yet never feels robotic – the whole thing feels achingly human.

That feeling is perhaps best evoked by the moments of pure euphoria that greet tracks like Talking Heads classic ‘Once In A Lifetime’ and ‘American Utopia’’s dancefloor-busting lead single ‘Everybody’s Coming To My House’. As the crowd throw their hands in the air and inhibitions to the sky, the band stick to the script, swapping places and moving around the stage in ruler-straight lines. Only breaking from the routine a few times – one to encourage his audience to vote in local elections; another to remark on the decidedly NSFW video for his next track, Fatboy Slim and Dizzee Rascal co-write ‘Toe Jam’ – it’s a stunning display of craftsmanship from start to finish.

As the night progresses, the set-up morphs somewhat. Jazzy Talking Heads track ‘Blind’ sees Byrne’s bandmates wheel a single, illuminated lamp to the front of the stage, which casts huge shadows of the performers on the back of the stage, creating a dizzying change in perspective. A set-closing ‘Burning Down The House’, meanwhile, sees each outing of that anthemic titular hook paired with flashes of crimson light which flood the stage. The band return for the first of two encores, which ends with the stunning, percussive Talking Heads hit ‘The Great Curve’, snarling guitar solo and all. It’s a moment that results in one of the night’s most touching breaks from the script, as Byrne’s guitarist skips off post-solo, only to be greeted with a sneaky, congratulatory fist-bump from one of her bandmates stood at the side of the stage.

Ending the evening on a more cerebral note, Byrne and band return to the stage a second time, stood in a stony-faced straight line. “This is a song by Janelle Monae – she sung it at the Washington Women’s March,” Byrne announces, “With her blessing, we have continued to update it. Sadly, it is as relevant now as it was then. You may not know the names in this song, but Google them – you’ll soon find out very quickly.” What follows is a breathtaking rendition of Monae’s ‘Hell You Talmbout’, a drum-backed, chanted list of black Americans killed by police. It’s a captivating end – one that brings several in the audience near to tears – and evidence that Byrne’s recent peddling of a modern ‘American Utopia’ was always very sarcastic. A brilliant end to a show like no other, it’s proof that David Byrne can do sombre numbers as well as he does celebratory ones, and that the ‘American Utopia’ tour may just be the best live show of all time.