As one of the main musical events in Italy, Umbria Jazz is renowned internationally for high quality performances and a beautiful location in the city of Perugia. Celebrating its 45th anniversary this summer, the Umbria Jazzfestival presented more than 500 artists in 250 concerts in various venues throughout the city, attracting an audience of over 450,000. Highlights of the first Umbria festival in 1973 included electric fusion with Weather Report, led by Joe Zawinul and Wayne Shorter and experimental stylings from the lively Sun Ra Arkestra. Over the past 45 years all the greats have played at the festival, including Dizzy Gillespie, Sarah Vaughan, Art Blakey, Charles Mingus, Gil Evans, Gerry Mulligan, Chet Baker, Cecil Taylor, Archie Shepp and Keith Jarrett. Today, the top acts in jazz and contemporary music continue to perform, along with a host of emerging talent.

The festival is spread across various venues throughout the city, with the Santa Giuliana Arena, an outdoor stadium used for the major acts. Gigs, many of which are free, are also at the beautiful historic theatre, Teatro Morlacchi, the National Gallery, wine bars and various outdoor stages. There is also a twice daily street parade led by the lively local marching band Funk Off.

We were blessed with an interval of torrential rain during the Massive Attack concert that only added to the already charged atmosphere. Knowing of the storm brewing, the support act Young Fathers performed very early, with most concert goers missing out. Fortunately the group was invited back during Massive Attack's set to perform with them. The two groups have worked together in the past and in fact the older group would likely consider themselves mentors. 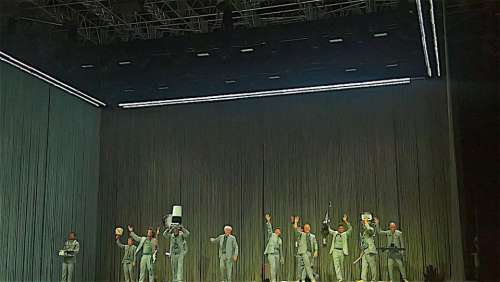 David Byrne never fails to impress with his energy, creativity and sheer brilliance. Old favorites like "Psycho Killer" and "Once in a Lifetime" from his days with Talking Heads featured, along with newer material. Recognising that the crowd wanted to dance, Byrne stopped performing mid-song to berate security for preventing the audience from coming to the front. The crowd went wild as everyone rose to their feet for the rest of the gig. As with other tours, Byrne has gathered a group of talented musicians for his American Utopia tour which runs until the end of November 2018, with several concerts in the UK and concluding in Australia.

The Kyle Eastwood Quintet, was a brilliant surprise and one of our favorite gigs of this year's festival. It's been seventeen years since the release of Eastwood’s first album "From There To Here" but this was the first time we’d heard him and it was his first appearance at Umbria Jazz. And what a performance it was with bassist Eastwood and his quintet playing eclectic originals from contemporary electro-jazz to ‘70s smooth jazz, along with a blistering Mingus cover. When he’s not working on his own albums, Eastwood has been composer and arranger on his father Clint’s Oscar nominated films “Mystic River,” “Million Dollar Baby” and “Letters from Iwo Jima.”

Born in America to parents from Rwanda and Uganda and currently living in Harlem, Somi bridges African and American jazz and soul. As one of the best gigs at Umbria jazz this year, Somi’s powerful, soulful songs were passionate and political on topics like the impact of gentifrication on immigrants in Harlem and Nigerian protests over the oil prices rising 250% in one day. Her African-tinged grooves, supple jazz singing and social consciousness have inspired comparisons with Nina Simone and Miriam Makeba.

Joshua Redman joined legendary jazz drummer Billy Hart and his quartet at the beautiful 18th-century Morlacchi theatre in a performance marked by spontaneity and improvisation. Hart is a jazz veteran who has played with all the greats since the 1960s. And Redman cites these jazz greats as well as modern music stars as influences: John Coltrane, Ornette Coleman, Cannonball Adderley, his father Dewey Redman, The Beatles, Aretha Franklin, the Temptations, Earth, Wind and Fire, Prince,  The Police and Led Zeppelin.

Also at Teatro Morlacchi was the acclaimed pianist Vijay Iyer Sextet. This DownBeat Magazine’s Artist of the Year four times – in 2018, 2016, 2015 and 2012 – and Artist of the Year in Jazz Times’ Critics’ Poll last year, is known for his improvisation that was well displayed in Perugia, with the help of his superb sextet of bass, drums and a trio with three horns.

Supermarket chain Conad sponsors a jazz contest as part of the Umbria festival aimed at emerging talent and in 2018, over a thousand musicians from 25 countries with an average age of 26 years entered the competition. We weren't surprised to learn that this year's winner was British group the Alex Hitchcock Quintet. When we heard the saxophonist perform at the London Jazz festival, we knew we were hearing a rising star. Winning the competition meant being asked to perform on the main free stage in the main square, the Piazza IV November. Hitchcock was ably supported by longterm collaborator pianist Will Barry, bassist Joe Downward, drummer Jay Davis and trumpeter James Copus. UK based jazz fans will be able to hear Alex's quintet at a number of dates this fall including at the Cambridge and London Jazz Festivals in November.

Hailing from Naples, Greece and Amsterdam, the Claudio jr de Rosa quartet performed a number of excellent gigs on one of the free outdoor stages. Featuring saxophonist, bass clarinetist, arranger and composer Claudio Jr De Rosa, the quartet are rising stars on the European Jazz Scene. De Rosa is a multi-award-winning young musician who is on the Top 10 list of “Italian Emerging Artists” by Musica Jazz magazine. His immense talent was well showcased at Umbria jazz.

Another young trio that surprised and delighted us performed at the National Gallery featuring Italian trombonist Filippo Vignato who performed with bassist Francesco Ponticelli and guitarist Francesco Diodati. Their avant garde free jazz numbers made for one of the most creative and exciting performances of the festival.

The festival's gigs in restaurants and bars offered further opportunities to hear new and established talents. Of note was the Max Gallo Quartet at the Bottega del Vino, led by guitarist Max Gallo with Jacopo Mazza on piano, Giorgio Allara on double bass, Giovanni Paolo Liguori on drums and a remarkable special guest appearance from thirteen year old sax player, Tomaso Profeta. And while not part of the program, an excellent pre or post music venue after a gig at the Morlacchi theatre is the Morlacchi bar. Likewise, the world’s tiniest bar, Il Burrino in the centre of the old town plays great funk, jazz and soul on an excellent sound system.