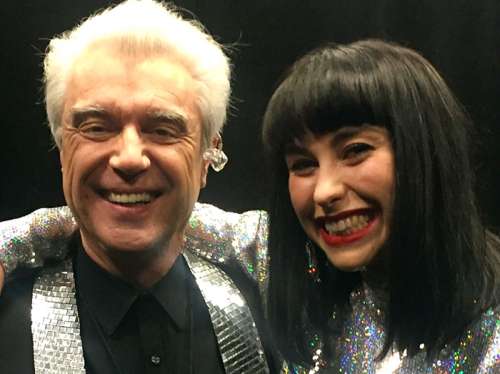 They performed together in a David Bowie tribute, they will be sharing a stage again in New Zealand and now David Byrne and Kimbra are a double-act in the pages of The Listener.

Byrne, who was the frontman of influential 1980s art-pop group Talking Heads, is interviewed in the new issue by the Grammy-winning Kiwi singer, who will be his opening act on his three NZ dates in November.

Says Listener Books and Culture editor, Russell Baillie: “We were told David Byrne wasn’t doing any New Zealand interviews. I remembered the Kimbra connection went beyond just being the support act. We asked her people to ask his people and, after many emails, everyone’s people said yes. I suggested some ideas for questions but Kimbra and her very big music brain had plenty of things she was curious about. It’s a good read.”

The pair converse about the state of music today, Byrne’s life in New York, his post-Heads career which has included founding World Music label Luaka Bop, work in theatre, opera and film, writing of books and being an advocate for urban cycling.

Byrne says he can’t remember much about the shows by his old band in 1979 and at their commercial height they headlined the Sweetwaters festival 1984. Though on more recent visits, Byrne tells Kimbra he recalls feeing “fairly terrified” when he was caught in a rip while swimming at a beach near Auckland but enjoyed visiting Rotorua and walking the Tongariro Crossing.

The pair sang together at a tribute to the late David Bowie at the Rock and Roll Hall of Fame induction ceremony in 2016. As well as sharing a producer in Brian Eno, Byrne says he had tried to emulate the other David in his pre-Talking Heads years.

“I remember hanging around art school in the early 70s dressing as best I could on a limited budget as a glam-rock star. I made my own leather trousers as new ones were way too expensive – I knew how to sew! – but didn’t factor in that leather stretches to fit the, um, body. So there were what we’d call knee pooches and such. It was pretty sad.

“I realised early on I’d never make a convincing glam-rock star, and I wasn’t even sure I’d have a musical career, but DB certainly liberated our thinking back in the day.”

The new issue of the Listener goes on sale on Monday.