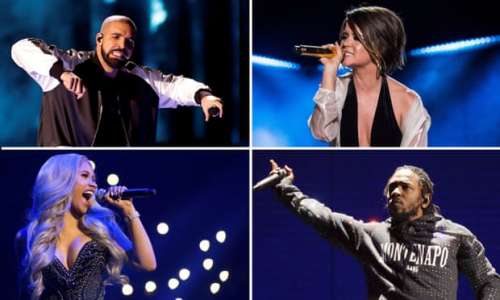 After controversy about the Grammys’ failure to recognise women’s achievements at the 2018 ceremony, female artists dominate key categories in the nominations for the 2019 awards. Country stars Maren Morris and Kacey Musgraves, rapper Cardi B, pop futurist Janelle Monáe and Lady Gaga could all take home major awards at the 61st Grammy award ceremony in Los Angeles next February.

Elsewhere, Kendrick Lamar and Drake dominate proceedings, with eight and seven nominations respectively. Along with Childish Gambino, AKA Donald Glover, they could rectify the other dispute that emerged from this year’s awards – namely the Recording Academy nominating but not awarding major hip-hop artists.

Recording Academy president Neil Portnow said in a statement that “reflection, re-evaluation and implementation” drove recent changes to the Grammys’ processes and nominations.

Cardi B, Brandi Carlile, Drake, HER, Post Malone, Janelle Monáe, Kacey Musgraves and Lamar’s Black Panther OST are up for album of the year, the Recording Academy’s most prestigious prize.

Guardian music critic Alexis Petridis said: “It seems like a concerted effort on the part of the Grammys to reward slightly less obvious artists than you might expect, and there’s something really pleasing about seeing talented but more tangential Nashville acts such as Brandi Carlisle and Kacey Musgraves being nominated in major categories.”

Many of pop’s biggest acts will be disappointed. Taylor Swift, who received seven Grammy nominations for her previous album, 1989, received just one for Reputation, and in best pop album, a minor category. The Carters, AKA Beyoncé and Jay-Z, as well as Ariana Grande and Travis Scott, were also left out of major categories, receiving nods in genre categories. Kanye West received one nomination as producer of the year.

More than half of the 2019 nominees in each of the four major categories (album of the year, best new artist, song of the year and record of the year) are women, with songwriter Brandi Carlile and R&B singer HER among the lesser-known. Female artists also dominate the country categories – a trend that flies in the face of the genre’s male dominance.

Only four women were nominated across all four major categories at the 2018 Grammys. Portnow compounded the issue when he said women artists needed to “step up” if they wanted to be recognised, comments he said he later regretted. In response to the outcry, the Recording Academy announced a taskforce to tackle anti-woman bias in the music industry, led by Michelle Obama’s former chief of staff, Tina Tchen.

The 2018 Grammys also sparked controversy for nominating a number of hip-hop stars yet sending few of them home with trophies. Strong showings for Cardi B, Drake, Kendrick Lamar and Post Malone could change that this year.

It is a mediocre year for British acts. R&B newcomer Ella Mai has found greater success in the US than her home country, and received two nominations for her breakout single, Boo’d Up. Dua Lipa and Jorja Smith are nominated for best new artist. Seal is nominated for best traditional pop vocal album, and Arctic Monkeys for best rock performance and best alternative music album. Jon Hopkins and SOPHIE were recognised in best dance/electronic album. Recent sales suggest the UK’s ability to produce global pop superstars has dwindled.

“The most vibrant music that’s currently happening in the mainstream in Britain – the post-grime wave of UK rap – is obviously going to struggle to cross over to America,” said Petridis. “There’s a big linguistic and cultural barrier facing those artists, as well as a longstanding American aversion to hip-hop that isn’t homegrown.”

The 61st Grammy awards will take place at the Staples Center in Los Angeles on 10 February 2019. Recordings released between 1 October 2018 and 30 September 2018 were eligible for consideration.

The Grammy nominations in full

Best Americana album
Brandi Carlile – By the Way, I Forgive You
Bettye Lavette – Things Have Changed
John Prine – The Tree of Forgiveness
Lee Ann Womack – The Lonely, the Lonesome & the Gone
The Wood Brothers – One Drop of Truth