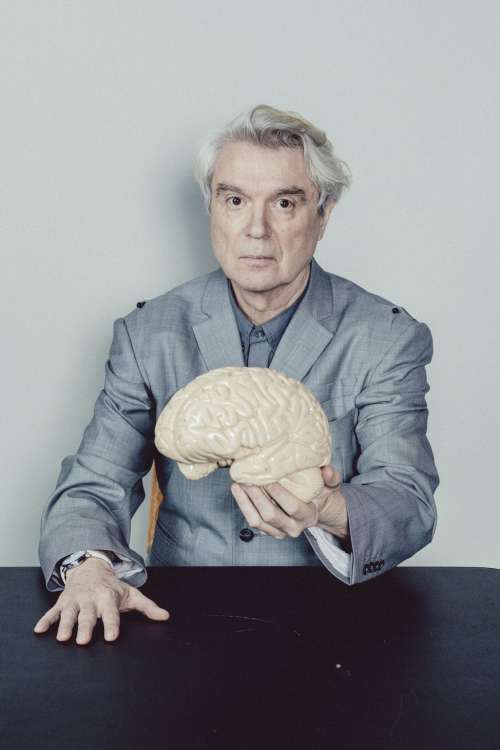 TRENTON — David Byrne is his own narrator. In conversation, he frequently interrupts himself to interject his internal monologue, as though he’s both performing a play and announcing the stage directions.

Backstage at the CURE Insurance Arena here, where he and his band are rehearsing for a tour, he starred in a brief pas de deux with a malfunctioning electric kettle. “What’s wrong with this thing? C’mon! Be nice!” he said. “I think it might be broken. Or the outlet might not be on.” He laughed. Just as it seemed his laugh had ended, he laughed again. “I’ll come back to that later.”

Although he’s often construed as a cheeky urban ironist, much of Mr. Byrne’s music, in the Pop Art tradition of Richard Hamilton or Andy Warhol, arises from an ingenuous fascination with mundane objects. Cynicism and wonder both permeate his new slippery art-pop album, “American Utopia,” which, he said, portrays “the state of the country: who we are, who we hope to be, all this kind of thing.”

The album title is neither ironic nor literal. “I’m certainly not describing any utopia,” said Mr. Byrne, 65, as he sliced a ginger root with a serrated chef’s knife. “Some of the verses, especially, are kind of dystopian, or not exactly cheerful. But they’re countered by the choruses, which seem to give a sense of hope.”

Mr. Byrne’s forlorn, hilarious portrait of the country is well summarized in “Dog’s Mind,” a wiry electronic ballad. “We are dogs in our own paradise, in a theme park all our own,” he sings placidly. “Doggie dancers doing duty, doggie dreaming all day long.” 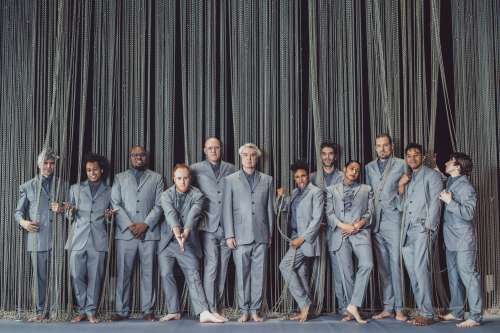 At the start of his career, when Mr. Byrne was the singer in Talking Heads, fans turned to him for alienation, not hope. He was so stressed and awkward onstage that people with Asperger’s syndrome embraced him as one of their own. After a final Talking Heads album in 1988, he pushed into a solo career that has set an enviable standard for variety and prestige: He started a record label that promoted the music of Brazil and Africa, wrote books and op-ed pieces, won an Oscar (in 1988, as one of the writers of “The Last Emperor” score), composed an operetta about Imelda Marcos and a musical about Joan of Arc, exhibited his visual art, and even had a guest spot on “The Simpsons.”

In Trenton, he was preparing a show so complicated and untraditional, the band and tech crew spent 90 minutes rehearsing how to block and light one transition. To create a bare stage — no amps, stands or risers — the drum parts have been divided between six percussionists. To make all 12 performers fully mobile, some musicians wear harnesses to hold their instruments, which means their matching gray Kenzo jackets need to be cut and resewn.

The choreographer Annie-B Parson, who is collaborating on the new show and has worked with Mr. Byrne since 2008, said he is “writing things that are much warmer now.” The Byrne she sees onstage is a giddy extrovert. “It’s almost like he’s from the old vaudevillian, British music hall tradition.” Without turning into Norman Vincent Peale or Dory, he has edged in the direction of hope.

“I think I am fairly cheerful most of the time,” Mr. Byrne said cheerfully, calling from a hotel room two days after our interview in Trenton. “But I can also be cynical and pessimistic about politics and issues like that.”

Mr. Byrne recorded this album — the follow-up to “Love This Giant,”his 2012 collaboration with St. Vincent — using a labyrinthine method. He heard some drum tracks created by the British producer Brian Eno, with whom he has worked steadily since 1978, and decided to pair them with lyrics he’d written in his notebooks. Mr. Byrne added more instruments, and felt the album was finished.

Then he played it for Mattis With, a producer and musician who also is an executive at Young Turks, the taste-making British label whose artists include the xx, Sampha and FKA twigs. Mr. With, 28, is a Norwegian living in London. (His gallivanting Instagram account will remind you how little you travel, how early you go to sleep and how few gorgeous people you know.) It takes no small amount of chutzpah for a 28-year-old to say that Brian Eno’s tracks aren’t good enough, but that’s what Mr. With gently did. “I thought they were maybe a starting point rather than a finished record,” he explained in an email. He proposed that Mr. Byrne revamp the tracks, using a new set of young collaborators.

Mr. With enlisted his pal Rodaidh McDonald, who produced the record with Mr. Byrne and Patrick Dillett. A 36-year-old Scotsman who’s worked with the xx, King Krule and Adele, and fell in love with Talking Heads while he was in art college, Mr. McDonald set up a kind of audition process, sending the songs electronically to different musicians, and instructing them to keep the structure, tempo and key, but “send me back a reimagined version of the song.” Then he and Mr. Byrne evaluated the competing tracks, decided which they liked best, deleted existing music they no longer loved (including, often, Mr. Eno’s), and sent the songs back to the collaborators who’d done the best job, with directions for further refinements.

“It felt like we were collaging the record back together,” Mr. McDonald said. In some ways, this process has less in common with the standard way of recording music than it does with the Willem de Kooning drawing that Robert Rauschenberg studiously erased in 1953, then named Erased de Kooning Drawing. 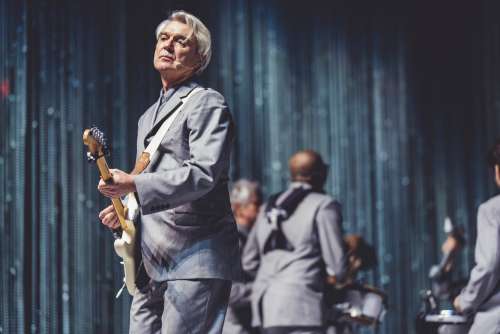 The credits on “American Utopia” are full of mononymous musicians from the digital underground: Happa, Koreless, Airhead, MMPH. “They all have kind of electronic D.J. names,” Mr. Byrne said with an avuncular smile. There were more than two dozen collaborators — all of them male, which Mr. Byrne recently apologized for on his Instagram, after he was criticized for not recording the album with women.

Mr. Byrne has been clear in his hatred of the president, but “American Utopia,” he said, is not his “Trump album.” He wrote the lyrics before the election, and even took some from nearly-ancient notebooks. (An early draft of the song “Here” included the phrase “sound of gunfire off in the distance,” which he used in 1979 for the Talking Heads song “Life During Wartime.”)

It is, though, an album about America, written by a guy who’s foreign in several ways. Mr. Byrne was born in Scotland, moved with his family to Baltimore when he was 8, and didn’t trade his Green Card for United States citizenship until 2012. For an artist who’s thought of as a global cosmopolitan, he’s written a lot of songs about America.

In “The Big Country,” from 1978, a man flies over the heartland and says disdainfully, “I wouldn’t live there if you paid me.” Two years later, in “Listening Wind,” Mr. Byrne imagined an aggrieved man in a poor Third World country who builds mail bombs to kill American colonialists. In the 1986 album and film “True Stories,” he depicted small-town Americans who, he said, “had invented odd ways of being that were completely original, but it was all working out fine for them.” A few years after 9/11, Byrne told an interviewer he had “a little bit” of empathy for people who commit acts of terror against the U.S.

Over 40 years, Mr. Byrne has shown gratitude and delight, mixed with embarrassment and fear, for his adopted country.

“There’s a lot that I love about America,” he said. “There’s a lot that I totally despise. Sometimes the two get mixed together. There’s an inventive spirit and a feeling that people can reinvent themselves, which goes back to de Tocqueville, and the idea that America could be a reinvention of what a country could be.”

As for writing songs about America, “I sincerely wish I could get away from it more,” Mr. Byrne said. “It’s maybe time to move on.”

But in America, paradoxically, Byrne has found a place where he can continually move on. He’s a profile in American reinvention — it’s here a kind of alien found a band, an audience and a home.