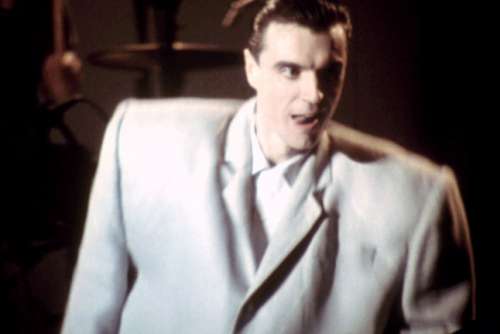 Since its 1984 release, Talking Heads’ Stop Making Sense has been lauded as the greatest rock concert film of all time by music nerds AND film nerds alike. Famed critic Pauline Kael called it “close to perfection” in her New Yorker review, and she’s like, the biggest movie nerd ever (besides Martin Scorsese, who made the other supposed greatest rock concert film, 1976’s The Last Waltz). All the acclaim makes sense when you realize few bands typify nerd rock quite as acutely as David Byrne’s group of former art school students turned quirky new wave hit makers. The film is currently streaming on Amazon Prime and, though not a huge fan of the band, I must admit, the nerds may be onto something.

Directed by Academy Award winner Jonathan Demme (Silence Of The Lambs, Philadelphia), Stop Making Sense builds gradually. The film begins with a ray of light on stage, interrupted by singer David Byrne making his way to the mic, wearing a suit your grandfather would think was bland and the kind of sneakers that would have gotten you laughed off the playground at the time the movie came out. “Hi. I’ve got a tape I want to play,” he says before a beat-box version of their 1977 calling card, “Psycho Killer,” starts the show. The stage is unadorned and the curtains are pulled back. From song to song, players join him, one or two at a time. By the end of the movie there will be nine musicians on stage and large screens showing graphics and text. It’s a canny bit of staging, and extremely effective.

Though made during the first epoch of MTV, Demme eschews the rapid cuts which became an ADD-inducing ’80s editing cliché. Sometimes a single camera will snake around the stage for the duration of a song, filming the band from behind, before focusing on the different players. Besides Byrne and fellow Talking Heads Tina Weymouth on bass, Chris Frantz on drums and utility player Jerry Harrison on keyboards and guitar, the band was augmented live by keyboardist Bernie Worrell, backing vocalists Lynn Mabry and Ednah Holt, percussionist Steve Scales and Alex Weir on guitar. Where the band itself were the WASPiest of white folk, the additional musicians were all black R&B veterans, and gave the group a funky swing not even David Byrne’s dorky dance moves could derail.

The movie was filmed in the wake of their commercial breakthrough, 1983’s Speaking in Tongues, with the set list relying heavily on tracks from the album. While hits where the production made the song, such as “Burning Down The House” and “Once In A Lifetime,” can’t stand up to their indelible studio versions, other songs are treated to exciting extended funk rave-ups, giving P-Funk alumnus Worrell a chance to get freaky deaky on the keys.

Byrne commands the stage like James Brown born into the body of Jimmy Stewart, running in circles, playing surprisingly good rhythm guitar, doing the funky chicken with his backup singers and donning a series of ever-larger light grey suits. He is eventually swimming in them, and when he puts on a red baseball cap at the end of the show, with his hefty grey rump, he looks oddly like Donald Trump in his bubble butt golf whites and red MAGA hat.

Frantz and Weymouth’s alter egos, Tom Tom Club, make an appearance to perform their 1981 hit “Genius Of Love.” While her supremely unhip dance moves and his banter of “C’mon Ya’ll! Who dat?” are cringe-inducing in 2018, trust me when I tell you they played the Hell of that song on New York’s black radio stations back in the day. The ecstatic finale of “Take Me To The River” and a frenzied “Crosseyed and Painless” are state of the art punk funk. Interestingly, by the time the film came out, the world no longer needed white musicians to present cutting edge black musical ideas in order to make them palatable, 1984 also being the year of Prince’s Purple Rain, Run-DMC’s debut album and Michael Jackson’s coronation as “The King Of Pop.”

Over the course of 90 minutes, Stop Making Sense never stops building momentum, holding your attention up until the very end. It is a supremely well-crafted piece of filmmaking, matched only by Talking Heads’ artistic ambition and prescience. In the 40 years since they put out their first records, the only thing that seems dated about the group is their clothing. Their clean, brainy, un-macho rock and they way they interacted with the world around them seems utterly current. Superlatives titles like “the best” and “the greatest” are an intellectual dead end when discussing art, but there’s no doubt Stop Making Sense is one of the most accomplished concert films, yes, of all time.