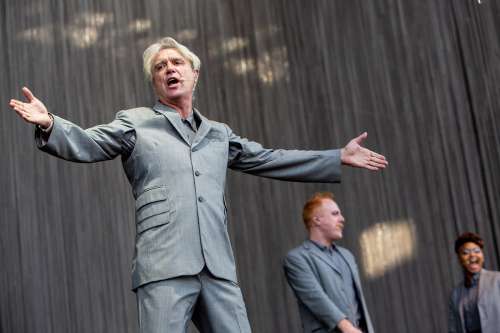 David Byrne just wrapped up his American Utopia tour which pretty much everyone agrees was an amazing show. Perhaps trying to catch a little of that lighting in a bottle, he’s putting out a live EP that was recorded at his Kings Theatre shows in Brooklyn back in September, featuring three songs from his new album, Talking Heads songs “I Zimbra” and “This Must Be The Place (Naive Melody),” plus “Toe Jam” from the BPA record he made with Fatboy Slim. The EP’s title, somewhat bizarrely, is a quote from a review in NME, including the name of the publication: …The Best Live Show Of All Time” —NME. The EP is part of the deluxe edition of American Utopia, which was just nominated for a Grammy, and you can stream it below.

David Byrne just released his directorial debut True Stories on home video via Criterion Collection, and is currently mulling over the idea of bringing American Utopia to Broadway.