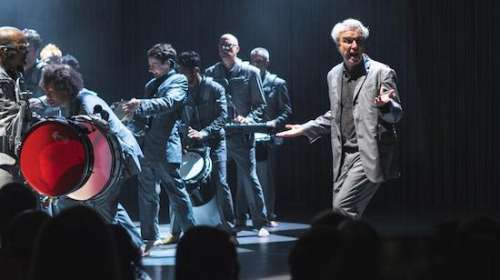 Since the end of David Byrne’s show last night I’ve been trying extremely hard to think of a better gig I’ve seen. Within reasonable grounds (it would be unfair to say it was ‘better’ than watching a dark ambient set in a church, or seeing one of the local screamo bands from my youth), I’ve failed to come up with anything.

Byrne has the kind of audience that includes people who quite like the Talking Heads songs they hear on daytime 6 Music and obsessive anoraks who can tell you who played conga on ‘I Zimbra’, with not many people in between. I shamelessly fit into that obsessive category, so it’s not that I didn’t want it to be the best show I’ve ever seen - it’s just that I knew I was probably destined to love whatever was thrown at me.

But, on a Wednesday night in west London, for once anoraks and casual fans are united. In the face of Byrne’s electrifying 12-piece band, all of whom are not only incredible musicians but adept dancers and singers as well, the audience goes completely wild. Whether it’s deep into the grooves and polyrhythms of Talking Heads’ 'The Great Curve’, or the unabashed silliness of ‘Lazy’, Byrne’s 2002 collaboration with X-Press 2, nothing is too serious or too absurd for everyone to lock into however they want. The band is one of the more diverse groups of people seen in a rock show in recent times, which adds to that rich and inclusive feeling.

The show balances Talking Heads classics with Byrne’s new album and other collaborative works, and it takes on a feeling of overall lightness that’s helped by the total absence of wires, stands, or any other usual stage obstacle. It’s a truly innovative show in its use of space, sound, technology and lighting - simply by removing the imposing physical structures these things usually assume. Each member of the band is mobile, either strapped to their instrument or holding it, with every move choreographed to perfection and everyone given their time in the spotlight.

In between these dazzling new arrangements of his catalogue, Byrne anchors the show in a political and socially conscious realm. In one of the few occasions Byrne speaks between songs, he explains how, on the US leg of the tour, they collaborated with an organisation that registers concert-goers to vote in the foyer of each venue, right next to the t-shirts. And on the blistering second encore, Byrne and his band cover Janelle Monae’s ‘Hell You Talmbout’, a protest song that repeatedly lists the names of African-Americans who have died at the hands of police brutality or racially motivated violence.

Byrne’s show provides a space in which to dance and sing together, to recharge ourselves and find worthwhile relief from the atrocities happening in the world outside of the venue, while simultaneously addressing them. Doing this while also deconstructing and rearranging what it feels like to watch a gig is ambitious stuff, but Byrne and his band completely pull it off.

In a recent entry on his website, Byrne observed that “There is a transcendent feeling in being subsumed and surrendering to a group. One becomes a part of something larger than oneself, and something in our makeup rewards us when that happens. We cling to our individuality, but we experience true ecstasy when we give it up.” Going to see the American Utopia tour is this very feeling in action.