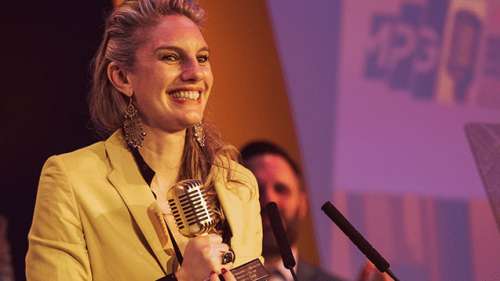 A third of all nominees are female, up from a quarter in 2018, marking an important milestone for a traditionally male-dominated area of the music industry.

Elsewhere, Shura is in the running for the Remixer of the Year title, alongside Matthew Herbert and IYEARA.

The Album of the Year category will be contested by Nadine Shah (Holiday Destination), Arctic Monkeys (Tranquility Base Hotel & Casino) and Everything Everything (A Fever Dream).

Cam Blackwood, Dave Eringa and James Ford are all nominated for UK Producer of the Year.

Catherine Marks (pictured above), the MPG’s 2018 Producer of the Year winner, said: ‘The MPG Awards are such a great event in our year as it gives us an opportunity to recognise the outstanding achievements of our engineering and producer community.

‘It was such an honour to win Producer of the Year in 2018, especially in a year where so many other women were acknowledged and awarded. I am looking forward to the MPG Awards next year and wish everyone who is nominated the best of luck.’

Final judging will take place at Abbey Road Studios in early December and the winners will be announced at a ceremony at Grosvenor House, London, on 28 February.

UK Album Of The Year
Arctic Monkeys: Tranquility Base Hotel & Casino
Everything Everything: A Fever Dream
Nadine Shah: Holiday Destination

Anna Calvi: Don’t Beat The Girl Out Of My Boy
George Ezra: Shotgun
The 1975: Love It If We Made It