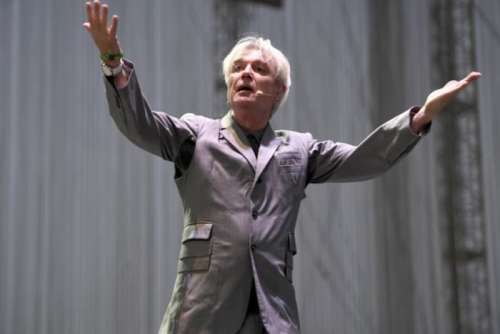 THE last time David Byrne brought this euphoric American Utopia show to Glasgow, they really did burn down the house. As his audience floated off into the June night high on positive energy, the Glasgow School of Art and adjacent ABC venue caught fire a few streets away, and the great uplift of experiencing a remarkable show was followed by grim disbelieving horror.

Since then, Byrne and his troupe of grooving players have been spreading joy and awe around the world with this immaculate Annie-B Parson-choreographed treat and it was only right that many more fans got the opportunity to bathe in its celebratory glow and theatrical wit.

Byrne and company could not realistically have hoped to match the concentrated electricity of their earlier Concert Hall appearance in this much larger venue with such a curated piece. On the other side of the balance sheet though: a much larger bare stage on which to execute the playful, prancing choreography, from the tribal pull of Slippery People, with its mischievous conversation between the six roving percussionists on one side and the backing singers and guitarists on the other, to the fidgety brilliance of Born Under Punches.

The simple yet sophisticated shadowplay lighting on Blind was particularly effective in this arena and the full congregation were finally swept up by Burning Down the House, the fairground carousel sounds of Road to Nowhere and the hectic skitter of The Great Curve with its blistering guitar solo, before being invited to holler along with Janelle Monae’s cathartic call to arms Hell You Talmbout. - FIONA SHEPHERD