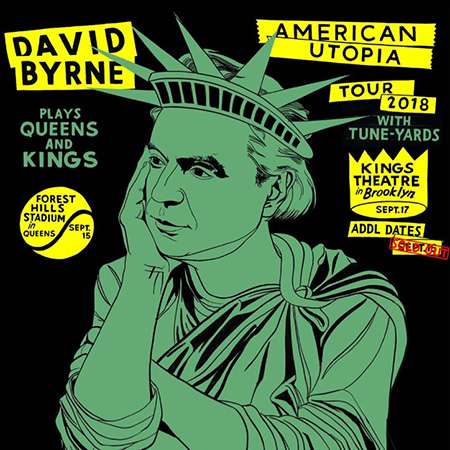 David Byrne brings his American Utopia world tour to New York City this weekend, performing at Forest Hills Stadium in Queens on Saturday and playing the first of two consecutive nights at Kings Theatre in Brooklyn on Sunday. The Forest Hills show is Byrne’s first return to the stadium in 35 years, since Talking Heads’ Stop Making Sense tour in 1983. Tune-Yards supports throughout this leg of the tour.

David Byrne’s “American Utopia show is, quite simply, a wonder of imagination, ambition and execution, a frequently breathtaking celebration of the miracle of life, even with all of humanity’s trials and tribulations,” exclaims the Los Angeles Times. “Byrne remains an absolute master of the theater of live music, and his latest is no exception: American Utopia is a joy to behold.”

“The David Byrne (American Utopia) show is incredible,” concurs Caetano Veloso, who caught the concert last weekend. “It is one of the most beautiful rock or pop concerts ever made and is unlike any other.”