There was a little bit of Broadway and a lot of Twin Peaks in David Byrne’s audacious new concert tour. The former Talking Heads leader started by singing to a plastic brain; later he was accompanied by a moving light-bulb and a man who danced with a mini-piano strapped to his waist. Weird and wonderful collided over and over. 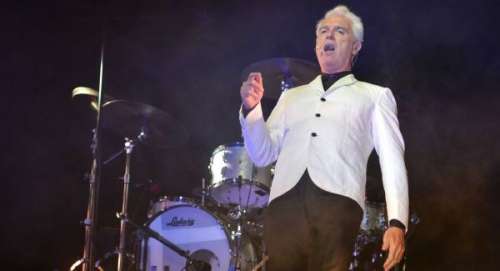 Byrne was taking a risk having the performance riff on the minimalist exuberance of Talking Heads’s seminal concert video Stop Making Sense. He had promised the American Utopia shows would be his most ambitious since that landmark 1983 revue. But was he building on his legacy – or did he risk blotting it ?

Stop Making Sense – which proceeded from Byrne rapping alone to a tape machine to a multi-headed carnival – has gone down as a historic subversion of rock’s shaggiest cliches. It was nervy and optimistic where the genre has traditionally been about swagger and sweat. Now he was doing it all over again with a solo show that began, as per Stop Making Sense, with Byrne seated and crooning as if to himself and soon blossomed into what at moments felt more like an avant-garde musical than rock concert. 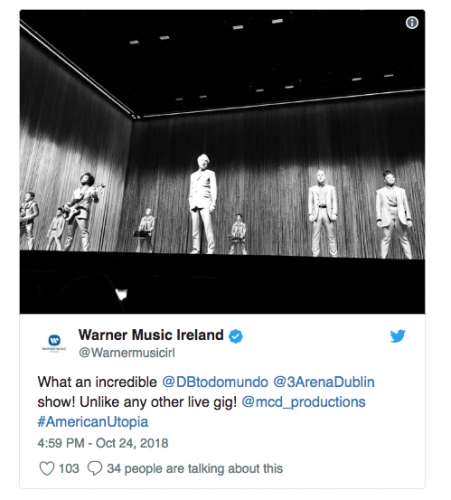 This time, there was a little more ostentation to the opening. Byrne was at a table and addressing a brain, as if participating in an experimental Shakespeare production gone off the rails. With the backdrop framed as a grey cube – a blank space for Byrne to project whatever he wished – he was joined by a dozen or so musicians, swaying and grinning as they played.

The over-sized suit Byrne sported in Stop Making Sense became a pre-internet meme. Here, he restricted himself to more sensible tailoring but nonetheless was a fascinating presence. Remarkably limber at 66, his grey hair swishing constantly, he cut a magnetically dorky figure (you could see why The Simpsons name-checked him as one of the outstanding nerds in popular culture).

But if the staging, a collaboration with choreographer Annie B Parson, was breathtaking – when the moving light-stand appeared and the walls turned red it seemed we were about to plunge headlong into a David Lynch movie – the music occasionally fell down. Byrne is touring his first solo record in 14 years and the plain fact is that American Utopia is the work of an artist slouching toward their twilight.

It’s eccentric rather than thrillingly off-beam. And if nobody could quibble with the central argument that we’re better off together rather than divided by petty political or societal squabbling the means by which the message was expressed was sometimes clunky.

The concert sprouted peacock feathers and came wonderfully alive, though, whenever Byrne reached into his past. An early one-two of This Must Be The Place (Naive Melody) and Once in a Lifetime were a reminder of Byrne’s gift for writing songs about death that make you happy you’re alive while a glimmering deconstruction of Born Under Punches underscored Talking Heads influence on a generation of jittery funkateers (LCD Soundsystem, Bloc Party, The Rapture etc). By the end people were standing and cheering, even as Byrne continued to flail wildly. It was a pop celebration unlike anything other. Ed Power