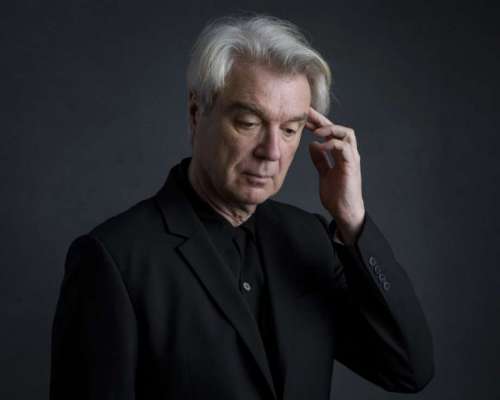 ALBANY –Kinetics, in physics, is the study of motion, and what forces and causes create it. In chemistry, it examines chemical reactions and how to influence them. If you really think about it, David Byrne's career pursuits are a form of social kinetics.

As a writer, he's examined how the creation of highways and urbanization impact culture in "The Bicycle Diaries." His recent "Reasons to be Cheerful" speeches examine how people take action to positively affect their communities. Musically, he's always incorporated different genres and melodic sensibilities to push boundaries and move into new sonic terrain.

And for his 2018 tour, Byrne has turned his live show into a form of kinetic art. On Sunday, Byrne brought this show to a sold-out Palace for a superb performance that was one of the most visually compelling concerts I've ever seen.

The opening of Byrne's show is reminiscent of the Talking Heads' concert flick "Stop Making Sense." With only silver beads around it to hide the backstage areas, the stage was barren, except for Byrne, who sat behind a desk, holding a model brain that he'd point out portions of for reference during opener "Here."

After that, the various members of his band (6 percussionists, 2 back-up vocalists, a bassist, guitarist and keyboard player) hit the stage, untethered from any cords, amps or drum kits for a set that drew on Talking Heads hits, "American Utopia" and tracks from Byrne's various solo projects.

Having his band completely mobile created a dynamic where there always something happening, whether it was synchronized dancing on the crowd-pleasing "I Zimbra" or the way the band lined up in patterns to ominously stalk Byrne around the stage during "I Should Watch TV."

On "Once in a Lifetime," Byrne danced, the nervous, herky-jerky energy of his youth replaced with a choreographed grace while his band weaved around him to much applause. "Born Under Punches (The Heat Goes On)" was controlled chaos, with every body moving all over the stage. What made all of this, the dancing and constant movement, all the more impressive was the fact Byrne and his phenomenal band didn't miss a note or beat all night.

Byrne also used lighting to fantastic effect. On "Blind," the overhead lights were turned off and floor lights were used to create long shadows of Byrne and the band across the silver backdrop. It was simple, but creative and added a fascinating visual component to a great song performed well.

The main set ended with a hot take of "Burning Down the House." Byrne played three songs over two encores. The first was "Dancing Together," taken from a musical about Imelda Marcos he scored with Fatboy Slim. It was so much fun.

The closer was a real gut-check. It was a cover of Janelle Monae's "Hell You Talmbout." Everyone in the band played a percussion instrument as Byrne and his singers chanted the names of Freddie Gray, Sandra Bland, Eric Garner, Walter Scott, Trayvon Martin and Emmett Till, all unarmed African-Americans killed by police or other racially motivated event, with a refrain of "Say his name." It was visceral and moving, but had the person next to me shouting, "I don't want this Trayvon (nonsense). I'm not prejudice, why does he have to do this?" He reminded me of another person who, earlier in the night when Byrne explained that he had the organization Head Count with him on this tour to help register voters hollered, "Just sing your (expletive) songs!"

These adamantly retrograde reactions were surprising at a show for an artist whose reputation is based on constantly being forward-thinking and moving.

Tune-Yards opened with a 45-minute set. The three-piece band blended alternative rock with looped beats, horns and vocals for a captivating performance. It would have been nice if the audience had been more enthusiastic.

Jim Shahen is a frequent contributor to the Times Union.