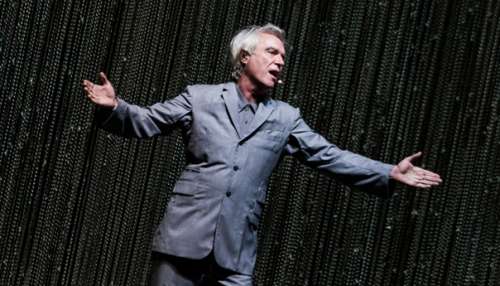 SAN FRANCISCO — David Byrne made his third stop in the Bay Area within a week Wednesday night at the Bill Graham Civic Auditorium, where the former Talking Heads frontman and his entirely untethered 12-piece band performed in a liminal space between the traditional rock concert and musical theatre, literally an empty gray stage bordered on three sides by shimmering strands of silver curtain that occasionally flashed with LED lights.

Byrne, who’s famous for his bold and iconoclastic vision, has called the tour in support of his March release, American Utopia, his most ambitious since the Talking Heads’ 1984 Stop Making Sense tour.

When the lights went down, Byrne sat at a school desk in a gray suit, lit with a spotlight and contemplating a pink rubber brain he held in his hand as the opening chords of American Utopia’s closer, “Here,” were played by a keyboardist emerging from behind the curtain. The slow and sparse opener was pensive and melancholy, imploring the audience to think about its circumstances. There was both an immediacy and past-tense to the music, as if it existed in apprehension of the tension and division in America, and was being made by someone who had been watching for a long time.

The band emerged from behind the curtain over the course of the second song, “Lazy.” The song is Byrne’s collaboration with British dance duo X-Press 2. Then six percussionists provided the churning rhythmic foundation for “I Zimbra.”

The band was also clad in matching gray suits, barefoot, with various instruments strapped to their waists and held in place by counterweights on their backs. The members danced around the stage, sometimes forming a line behind Byrne, at others moving with seeming random leaps and bounds. Even with the sparse stage, there was no shortage of stuff to look at. For most of the songs there were four or five percussionists, a guitarist, bassist, keyboardist and two backing singer-dancers.

When the funky chuka-chuka guitar signaled the beginning of the Talking Heads’ 1983 song “Slippery People,” fans, who up until this point had mostly been seated, stood and began to rock out. They were led by Byrne, who danced on stage like a fish with tiny fins.

The stunning visuals weren’t meant just to wow the audience; they often carried a clear message. At the beginning of “Maybe We Should Watch TV,” his duet with guitarist and singer St. Vincent, Byrne confronted a glowing console at the side of the stage before eventually being consumed by it at the end of the song.

The songs were political. On American Utopia’s “Dog’s Mind” Byrne sang “The judge was all hungover/When the president took the stand/ So he didn’t really notice/ When things got out of hand.” Afterward, Byrne explained that on this tour they’ve been working with get-out-the-vote organization HeadCount/

“Every single one of you needs to vote; no excuses,” he said. “And if you’re a minority, take your drivers license.”

The band then blasted into new track “Everybody’s Coming to My House,” before playing the Talking Heads’ hits “This Must Be the Place” and “Once in a Lifetime.” These drove the crowd into a frenzy. The shoulder pads were slightly smaller, but Byrne’s spastic jerks and vegetable-chopping dancing was still there. However, when the crowd sang along to the chorus, “Same as it ever was,” there was a palpable sense in the air that in the craziness of the 21st century, this was no longer true.

Byrne slowed down the tempo with his haunting anti-gun song, “Bullet,” which featured a hauntingly beautiful melody as Byrne described a bullet ripping a human brain apart.

For the soulful “Blind,” spotlights on the band cast giant shadows on the curtains behind them. The main set ended with the Talking Heads hit “Burning Down the House.” The encore included “Dancing Together,” which Byrne introduced as one he wrote about Imelda Marcos, before noting that convicted former Donald Trump campaign manager Paul Manafort had worked for the infamously greedy former first lady of the Philippines.

The band finished up with “The Great Curve,” off the Talking Heads’ 1983 album Remain in Light and a cover of Janelle Monae’s “Hell You Talmbout,” which he performed with openers Ibeyi.

Throughout the show, Byrne showed his genius for the way an artwork’s aesthetics can help deepen its meaning. The empty stage allowed the audience to hear the songs in a different way. Instead of making it seem like the band was merely playing, the lack of familiar rock and roll trappings emphasized the musicianship of the players. The matching suits emphasized the diversity in age, race and gender of the band members. The elaborate, choreographed interactions showed the complexity of their musical interplay.

Byrne’s latest production is ambitious and bold, but is simultaneously rooted in his idiosyncratic humanity. He’s a good host, inviting you inside to enjoy yourself, even as the world is falling apart.

French-Cuban duo Ibeyi opened the show with a set of about 10 songs, including “River,” “I Wanna Be Like You,” “Oya” and “No Man Is Big Enough for My Arms.” The latter was an anti-Donald Trump anthem, and sampled Michelle Obama’s voice, from a speech where she said, “The measure of a society is how it treats its women and girls.” The sisters wore matching baby blue denim jumpsuits, but it was their vocals, set against their rhythmic, hip-hop-influenced sound that highlighted their performance.