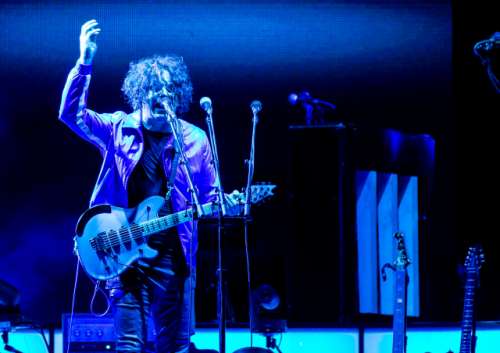 Shaky Knees Festival returned for the sixth year this weekend, taking place in Central Park for the first time in two years. In 2016 and 2017 the festival was held in Centennial Olympic Park.

During the first day of the three-day festival, the weather reached a high of 83 degrees as attendees shuffled among four stages, which were spread out, and effectively minimized pedestrian traffic and noise pollution.

Here is a recap of Friday’s festival:

“Now that’s the way to start a tour. Wow. Thank you #Atlanta and the @ShakyKneesFest,” Jimmy Eat World tweeted Friday following an energized Shaky Knees set. The band kicked off their summer tour at the festival just hours after the release of two new songs (“Love Never” and “Half Heart”). Wearing a blue and white checkered flannel shirt and black pants, singer Jim Adkins led the band through the new material, as well as a series of fan favorites and hits, ranging from 1999’s “Lucky Denver Mint” to 2016’s “Get Right.”

The show’s highlights came from the band’s 2001 album “Bleed American” (also known as “Jimmy Eat World”) and included the festival-friendly song “Sweetness” and the band’s biggest hit “The Middle.” “If you’re listening (Whoa). Sing it back (Whoa),” the band sang during the former. The crowd was happy to oblige.

“Hi. Good to see you,” Australian rocker Courtney Barnett said casually after walking onto the Peachtree stage. Dressed in black from head to toe, on a stage that was empty aside from the musicians and their instruments, Barnett kept the focus on her songs. In addition to performing popular singles such as “Avant Gardener,” the singer also performed songs such as “Small Poppies,” ramping up the brash anthem and banging her head along to the music. Ahead of her second studio album, “Tell Me How You Really Feel,” which is expected to be released later this month, Barnett opened the show with the deceptively cheery “City Looks Pretty” (“The city takes pity on your injured soul.

Franz Ferdinand singer Alex Kapranos finds a groove at Shaky Knees on May 4, 2018. Photo: Ryan Fleisher/Special to the AJC

And heavenly prose ain’t enough good to fill that hole”) and also performed “Nameless, Faces” from the album.

Of the bands we managed to see during day one of Shaky Knees, Franz Ferdinand was the most disappointing, although the Scottish band’s set seemed promising in the beginning. “So happy to be back in Atlanta,” lead singer Alex Kapranos told the crowd before launching into “The Dark of the Matinee” from the band’s self-titled debut album. Despite their songs being full of repetitive bouncy guitar riffs and easily accessible hooks, the band lacked both the energy and the setlist necessary to capture the attention of the crowd.

Show highlights included “No You Girls” and the band’s biggest hit “Take Me Out.” After the latter, the crowd began to leave the area in droves as the band continued on with their set, playing “This Fire.”

Wearing matching gray suits, David Byrne and his band performed a setlist full of solo music (“Everybody’s Coming to My House”) and Talking Heads songs (“This Must Be the Place” and “Burning Down the House”). While Byrne’s attire and stage setup were both muted gray and sterile, the singer easily had the most visually and sonically appealing show of the night. Byrne and his band moved all over the stage, delivering intriguing choreography during the set, including wild and erratic movements during “Once in a Lifetime” and ironic lackadaisical moves during “I Dance Like This” (“I dance like this because it feels so damn good. If I could dance better, well you know that I would”). Nothing on the stage was tied to one place. Even the backdrop, a series of hanging gray strings, were moved throughout the performance.

Byrne closed his set with a chilling performance of a Janelle Monae cover. He said he got permission from the Atlanta-based singer to perform and update the protest song “Hell You Talmbout.” Originally created by Monae and her Wondaland collective in 2015, the song features chants of the names of black victims of police brutality. Byrne’s version was updated to include the recent deaths of people such as “Stephon Clark,” as well as Emmett Till. Till wasn’t killed by police, but his death played a major role in elevating the Civil Rights Movement.

For nearly two hours, Jack White helped close out day one of Shaky Knees with a setlist that included solo material, as well as music from his time with The White Stripes. A nod to his favorite number, three, the screens on White’s stage were divided into threes, at times displaying duplicate versions of the singer and other imagery. White switched between two mics, offering distorted vocals during songs such as the opener “Over and Over and Over.” Dressed in a blue jacket, black T-shirt and pants, White moved around the stage, touching each side of the stage and standing on the drum stand, while delivering vocals that matched the wailing of his guitar.

In addition to performing staples such as the show closer “Seven Nation Army,” White also performed music from his most 2018 album, “Boarding House Reach,” including “Corporation” and “Why Walk a Dog?”

During his time on stage, White’s musicality and presence was captivating. The show was great, aside from an awkward moment about one hour into the rocker’s set. For roughly five minutes, White and his band left the stage, leaving the crowd in silence, with the images on the screen as the only warning that he planned to return.

Just before he returned to the stage, an image of President Trump in a circle appeared on the backdrop as White’s drummer threw projected darts at the photo.