More than 20 years ago I told a friend about a song I'd like to have played at my funeral.

It wasn't a morbid conversation by any means, more a realisation that I'd discovered a song that I truly loved and wanted to share.

The song was 1983's This Must Be the Place (Naive Melody) by American band Talking Heads. It's a sweet and personal tune, a little unusual from the band's usual fare. 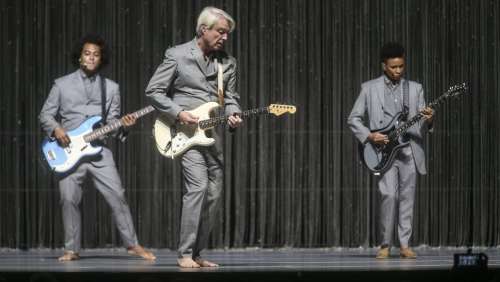 So, hearing Talking Heads frontman David Byrne belt out that particular song as part of his solo American Utopia tour at Wellington's TSB Arena on Tuesday night made for an exhilarating personal experience.

The show is more than a music concert. There is precision choreography, performance art, even touches of modern dance.

It all starts simply, with a desk and chair in the middle of a stage. Byrne arrives with a model of a human brain to sing Here from his latest album. Slowly, 11 other performers, also all barefoot and clad in black join him. 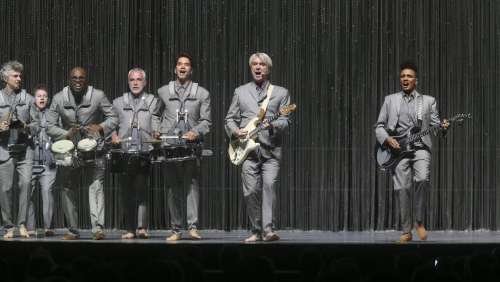 The momentum builds and as the first two Talking Heads tracks land (I Zimbra and Slippery People) the performers really get into their work. Never had such a grey arrangement been so vibrant.

Byrne, 66, was not content with going through the 'retirement tour' motions. The king of collaborators once again showed why he is so hard to define.

His willingness to try anything and work with such a variety of artists - not just in music - make him one of modern music's most under-rated creative forces. 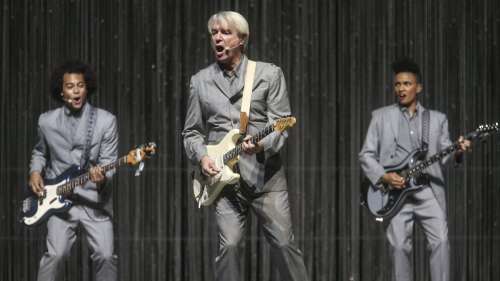 New Zealand's own Kimbra opened the show, setting the perfect tone, with an off-kilter and (sorry, I hate to say it) quirky set that prepped the Gen X/Boomer crowd for what was to come. Her maturity and confidence shone through, with animated vocals and dancing that drew complimentary parallels with Bjork and Lady Gaga.

Decades may have passed since his hit music years, but his commitment to the cause needs to be applauded - and was. With an intensity and sheer belief in the material Byrne and his impressive support artists - singers, dancers, percussionists - nail it.

A keen cyclist, Byrne made special mention of going for a ride around Oriental Parade, before launching into another energetic number.

A feature of the two-hour show is the perpetual motion of the musicians, who all stand during the show and seem to never take a break.

Byrne brings up a story, oft-told, about how some people don't believe that all the sounds come from the crew on stage. Then he goes about proving how the show all works, with a gradual build-up of instruments, starting with drums, to show it's not a smoke and mirrors effort. It's world-class performers doing what they do best. 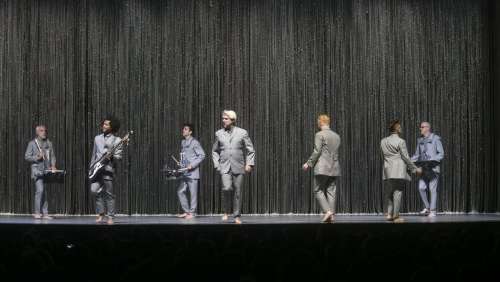 Byrne is a rare hybrid. Part classroom nerd, part TED talker, part showman, part mad scientist. There is no other performer quite like him.

The Wellington concert was Byrne and his team's 139th concert this year (I hope I've counted correctly). Let that sink in. They have been on the move around the world since March. That brutal schedule could sap most musicians, but not Byrne and the 11 others on stage with him.

He's fresh, inspirational and straight-up entertaining. The set has the perfect blend of classic tunes (Burning Down the House and Road To Nowhere among the crowd favourites), while mixing in newer material.

The double encore was well-received, with the finale an intense cover of Janelle Monae's protest song Hell You Talmbout, referencing a list of African-American killed by law enforcement or racial violence. It's a powerful and thought-provoking ensemble-driven piece.

The world tour ends with four Australia shows, the last in Adelaide on November 25. Byrne and his troupe of performers would have well earned a break by then.