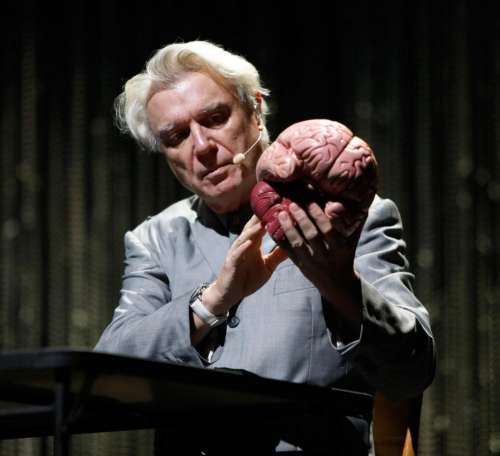 David Byrne stole the show on the first day of the festival (not fair, I know). Unfairly, I found myself and others comparing every other performance to his the rest of the weekend. The minimal stage design featured chain hung from rigging creating shackle walls which blocked all stage production muddle. Gone were all the mics, stands, amplifiers, cords, plugs, power strips and monitors. As the chains raised and lowered, the sound they made was piped through the concert creating not only a visual cleanliness but an auditory wash of white noise.

Byrne emerged through the back wall and sat holding a brain, pondering it like a Shakespearean character during the opening song “Here” off 2018’s American Utopia. From there the set leaped into action as Byrne was joined by a dozen barefoot musicians clad in grey suits. The 66-year old never stopped moving and his band didn’t miss a beat. Byrne filled the stark stage with choreographed dance moves and the dreamlike use of dramatic lighting. They projected blue lights simulating TV as Byrne starred into the distance singing one off of his St. Vincent collaboration, the horn-driven “I Should Watch TV.” Byrne’s new songs blended perfectly with hits as “Everybody’s Coming to My House” butted up against two Talking Heads classics “This Must Be The Place (Naive Melody)” and “Once In A Lifetime.” The latter two songs had young and old up and grooving to the master performer. Byrne ended the show with a one-two punch starting with the dance-friendly sing-along “Burning Down The House.” The finale was a moving cover of Janelle Monae’s protest song “Hell You Talmbout,” written about people of color who have been killed by police. “I saw her perform this at the Women’s March — it is sadly as relevant now as it was then. We have updated it, and will continue to do so,” said Byrne before pounding drums while leading a call-and-response where he and his band mates shouted the names of men and women killed by law enforcement. The moment was moving and well positioned and left me in awe of Byrne.