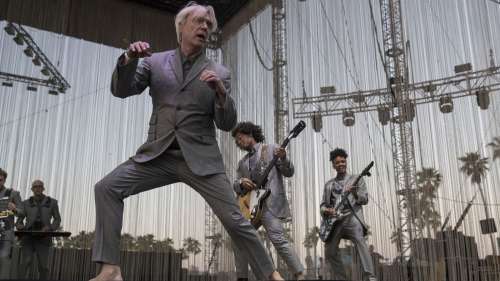 Two weeks ago, in a recap of Coachella's on-stage fashion moments, I lamented not knowing the provenance of David Byrne's stylishly quirky suit. Yesterday, the answer landed in my my email inbox. The credit goes to Paris-based, LVMH-owned luxury label Kenzo.

No, the suit wasn't weirdly boxy and voluminous like the one the Talking Heads frontman memorably donned in the "Stop Making Sense" shows of the early 1980s. This gray, three-button, notch-lapel number was tailored smartly to Byrne's frame. What made it noteworthy were two details in particular. One was barely noticeable but wholly functional — a crease or fold just behind where the sleeve of the jacket joined the shoulder, which seemed to provide a greater range of motion as he moved about the stage with all three buttons of the suit jacket buttoned. (FYI: While Byrne can do whatever he wants, the rule for the rest of us menfolk is to sometimes button the top button, always button the middle button but never button the bottom button of a three-button suit.)

The second detail was hard to miss — even from my vantage point in the middle of the dusty polo fields of Indio — a trio of pocket flaps on the right-hand side of the jacket. A second pocket on that side — located directly above the jacket's right hip pocket — is traditionally referred to as a ticket pocket (from the custom of stowing one's train ticket there), but I'd never before seen a third pocket stacked on top nor have I since in the many fruitless hours spent scouring the interwebs. 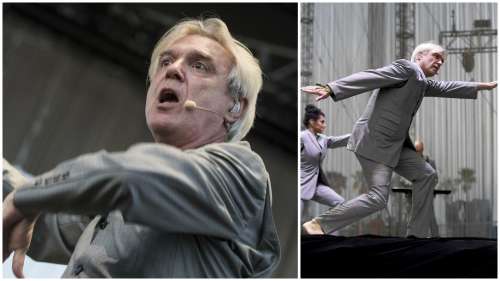 Kenzo's creative directors, Humberto Leon and Carol Lim, couldn't immediately be reached to shed any light on the minor menswear mystery of the tertiary ticket pocket. According to a brand rep, they're currently on set shooting a Kenzo film. But hopefully we'll get the full back story by the time Byrne brings his band — also clad in custom Kenzo for the duration of the American Utopia tour — through town on Aug. 25, when they're set to perform at the Shrine Auditorium.

Leon and Lim were first approached about creating custom-tailored suiting and shirting for Byrne and company toward the end of last year and "jumped at the chance," according to the May 3 announcement.

"We were thrilled to be asked to create tour looks for David Byrne and his band," the duo said in the email. "We have been huge fans of David for decades, both for his solo work and for his work with Talking Heads. We have so many memories listening to his music over the years. We wanted their custom Kenzo suits and shirts to reflect the cool confidence and style that they express with the music they create."

To which I say, "Mission accomplished" — quixotic pocket and all.