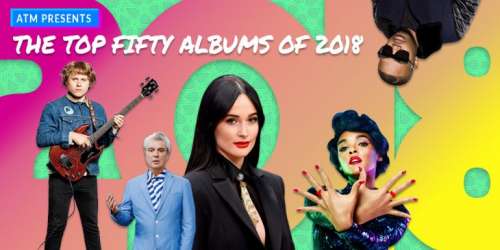 Throughout 2018, as we gleefully indulged in what was another stunning year in music (especially for women artists and hip-hop!), we continually came upon a common thread: catharsis through music. In these complicated, plugged-in, and often divisive times, music can be leaned on to provide a pause from the insanity of the twenty-four hour news cycle. For us, the following list is comprised of artists whose thoughtful introspection, and wonderfully crafted, unique, and intricate soundscapes whisked us to a place where little mattered besides relishing in the moment. These are the albums we are most grateful for in 2018. As is often the case, paring down this year’s offerings to a choice fifty was challenging to say the least, but we are proud to present to you the albums which received the most play over here at Across the Margin. So, without further delay, let’s step in and drop the needle…

This year David Byrne, the 66 year old former frontman of The Talking Heads, released his first true solo album in fourteen years, American Utopia. As welcome as this brilliant new release was to longtime fans of the prolific artist, so too was the news that he was to embark upon an eighty-plus date world tour in support of the album. Unsurprisingly, The American Utopian tour was breathtaking, a meticulously produced and executed work of performance art that NME exclaimed it “might be the most ambitious and impressive live show of all time” (and we certainly understand why). Bolstered by a few Talking Heads classics, the lion’s share of the tour focused on the plethora of marvelous songs that comprise Byrne’s latest release. American Utopia is part of a larger multimedia project called “Reasons to Be Cheerful,” and features contributions from Brian Eno, Jam City, Oneohtrix Point Never, and Sampha, with an aim of presenting unique and ultimately positive ways to look at the world. A response to the uncertain political climate, American Utopia doesn’t shy away from the fact that the world feels as if it’s on fire (where, “The judge was all hung over / When the president took the stand / So he didn’t really notice / When things got out of hand”). But rather than allow despondency to overwhelm, the album serves as a reminder that “Every day is a miracle” and celebrates the power of companionship (“Now everybody’s coming to my house / And I’m never gonna  be alone”), In true Byrne fashion genres are blended seamlessly across the album, and afrobeat, funk, electropop, disco, and rock are conjoined to birth instant classics such as “Everybody’s Coming To My House,” “I Dance Like This,” and “Gasoline or Dirty Sheets.” It is amazing that David Byrne’s music still feels so fresh and inspired this late into his career, and that on American Utopia he has somehow redefined himself once again. It is an extraordinary album, serving as a testament to his Byrne’s power and highlighting his unflappable spirit.

Essential Tracks: “It’s Not Dark Up Here.” “Everybody’s Coming To My House,” “Gasoline or Dirty Sheets,” “I Dance Like This.”