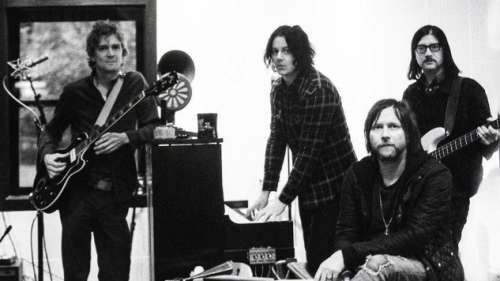 It’s the second-to-last Friday of the year, and though album and track releases have thinned out, you don’t have to look as hard as you might think for great new music. As you shop for last-minute Christmas gifts, bake festive holiday treats and start to clean your house to prepare for a family gathering, you might want to take a break from all the “fa la la’s” and jazzy Christmas classics. Consider throwing on some new reissues from David Byrne and Manic Street Preachers or new singles from Cigarettes After Sex or Young Jesus. What could be more festive than listening to a band called Young Jesus? It turns out, a lot of things, but never mind that. This week also saw the long-awaited return of The Raconteurs, who dropped their first new music—two new tracks and videos—in over a decade ahead of their brand new album next year. Indulge in the best new albums, songs, live sessions and Paste features from the past week below.

For fans of David Byrne’s directorial debut True Stories, a delightfully odd musical comedy from 1986, trying to compile a full version of a soundtrack has been a small chore. Byrne’s band Talking Heads recorded versions of many of the songs featured in the movie, releasing them as an album of the same name, and much of the film’s score was released as Sounds From True Stories, though never available on CD. As well, the versions of the songs in the movie, as performed by a cast that included John Goodman and Annie McEnroe, were used as b-sides to singles and reissue filler. This year, those lovers of the cult classic have finally gotten their wish. To coincide with the re-release of True Stories by Criterion Collection, the full package—True Stories, A Film By David Byrne: The Complete Soundtrack—is finally here. And what a glorious package it is. Goodman’s rendition of “People Like Us” is the standout. Byrne’s version on True Stories is a classic, but Goodman takes the tempo up just a notch and throws his whole voice behind it. It’s not the best vocal performance on the album—that goes to McEnroe bringing her drifting, Kate Bush-esque lilt to “Dream Operator”—but it sums up the town of Virgil and the whole journey that Byrne has taken us. As curious as they might be, they put their whole heart into what they do. It’s a simple, sincere message, but sometimes it takes a band as offbeat as the Talking Heads to remind us of just that. It should not have taken us this long to get the complete soundtrack. In that time, Radiohead, which took its name from a song on the album, not only formed, but have been around long enough to be inducted into the Rock & Roll Hall of Fame. But like all good road trips, the destination is worth the drive. —Libby Cudmore